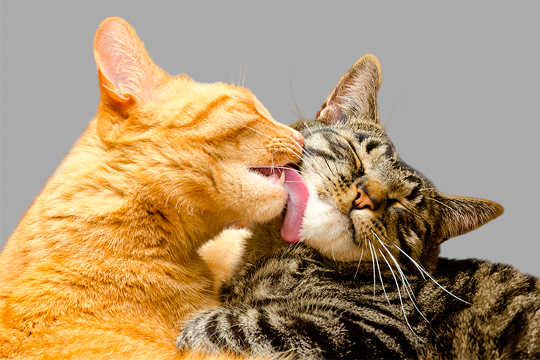 Have you ever been licked by a cat? If so you’ll know the feline tongue feels more like sandpaper than satin.

A cat’s tongue is covered in hundreds of sharp, scoop-shaped spines made of keratin that spring into action during grooming. Until now we haven’t really known why their tongues are so rough.

But new research, published today in Proceedings of the National Academy of Sciences, shows they play a role in helping a cat keep cool.

Domestic cats spend up to a quarter of their waking time grooming their fur coat to help remove pesky fleas and loose hairs. If they didn’t groom, then any excess debris could tangle fur, causing painful tugging of the skin, and even lead to infection.

But the new study reports something else that happens when a cat uses its tongue for grooming.

The scientists used CT scans of cat tongues to work out the structure of the spines, known as papillae. The spines are about 2mm long and have a U-shaped cavity at their tip (more on why later). The researchers also measured the hardness of the papillae, and found it is similar to that of human fingernails. 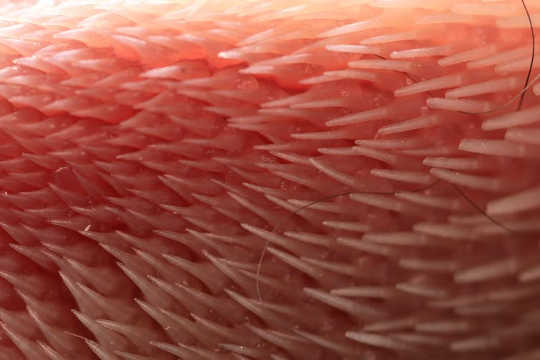 It got more interesting when the scientists used high-speed videography to work out what happens to the spines when a cat is grooming. Only the spines at the end of the tongue contact the fur during grooming. These are larger and not as closely packed as the spines nearer the bottom of the tongue. 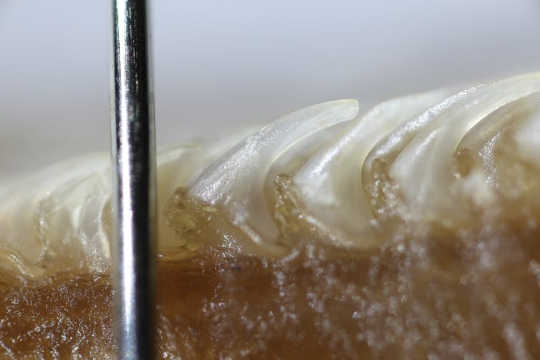 As a cat grooms, there are four steps. First the tongue is extended out of the mouth. Then the muscles in the tongue expand the surface, and the spines rotate to become perpendicular to the tongue.

In the final two steps the tongue sweeps through the fur and is taken back into the mouth with a U-shaped curl.

This is a black cat grooming its fur, displaying the papillae on the tongue.

Using some fake fur and a force plate, the scientists calculated that with the amount of compression of the tongue on the fur, the spines can actually contact the skin of the cat.

This is where it gets even more interesting – and also a bit icky, as we need to think about cat saliva.

The U-shaped cavity in the tip of the spines, which we mentioned earlier, acts as a wick in the mouth to take up saliva. This is the same action as when you put the tip of a tissue in water and the water creeps up the tissue.

Because scientists like to work out the detail, they calculated that these cavities would take up around 4μL (microlitres) of saliva across 290 spines. (It would take around 1,200 times this amount of saliva to fill a 5ml metric teaspoon.)

This 4μl is only around 5% of the total saliva on the surface of the cat’s tongue. Not much, but it has a really important function as it can deposit saliva right down to a cat’s skin.

The scientists used the estimate that cats spend around a quarter of their time awake grooming (about 2.4 hours a day) and lick about once per second.

This means cats can lose around a quarter of the total heat they need to lose per day through the tiny bit of saliva in their tongue spines. (We lose heat through liquid by sweating when we’re hot.)

Many (not all) cats live in hot climates, so this would be really important for their survival. The researchers looked at the tongues of several species of cat, including domestic cat, bobcat, cougar, snow leopard, tiger and lion.

Most cats groom themselves very effectively, helped by enzymes (special chemicals) in their saliva that dissolve blood and other debris.

By working out how far the spines penetrate cat fur, and measuring the length of fur in different breeds, the scientists also worked out the only cats that can’t groom themselves effectively are domestic Persians, which are typically long-haired.

This means if you own a Persian you need to take the time to brush them, or else matts form and can damage their skin and lead to infections. But here’s where the scientists made another breakthrough.

In the final part of this research, the scientists used the knowledge they gained about the spiny form of a cat’s tongue, and used 3D printing to develop a better grooming brush to use on cats.

The scientists say the biology-inspired brush should help remove allergens from cat fur, and help with the application of any cleaning lotions and medications on cats’ skin.

So next time you watch a cat grooming, take a moment to marvel at just how much awesome science is involved in the evolutionary design of its tongue.

How Can You Tell If Your Cat Is Happy And Likes You?

by Susan Hazel
The things you see your cat doing are probably what it enjoys. As long as it gets the chance to do… by Susan Hazel
Most pet owners know chocolate and dogs don’t mix. Despite this, chocolate poisoning in dogs… by Ineke van Herwijnen
Cats and dogs famously don’t get on with each other. We seem quite able to recognise a fight… by Ann Hemingway, Bournemouth University
We’ve all heard of the psychotherapy couch, and the dynamic between a client and their human…