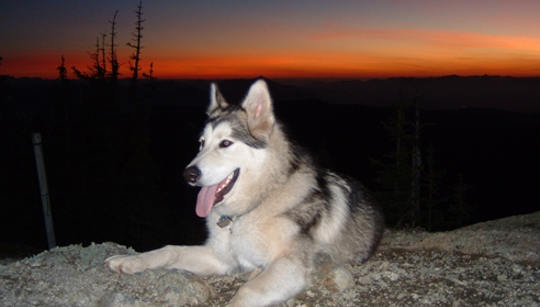 Mowgli arrived at Best Friends Animal Society in Utah after being rejected by two shelters. On my day for volun­teering, I saw the eight-month-old malamute sitting off by himself, and I walked over to the fence to talk to him. When those mahogany eyes looked deep into my heart and touched my soul, I fell in love.

His caregiver said he was unapproachable. But when we entered the run, I knelt down and held out my hand; Mowgli walked up and let me touch his nose. I was ready to take him home that day, but he wasn’t cleared for adoption yet. As soon as he was cleared, my offer was re­jected because of his shyness and the two alpha huskies I already had at home.

Eight years later, both huskies were gone, and Mowgli was still at Best Friends. I brought Sami, my border collie, to meet him. After all that time, Mowgli let me approach him once again! He and Sami got along well, so Mowgli came home at last.

Mo was still extremely shy, and he feared touch. He also disliked closed rooms. But he seemed comfortable with us; since my house has a circular floor plan, he could always get to the dog door and the yard. He chose a sleep­ing spot in the hallway outside my bedroom, where he could see Sami and me and still have a direct path to the exit.

To encourage his trust, I held Mo’s food dish while he ate. I didn’t touch him, but just spoke quietly and praised him when he was finished. He was always wonderfully gentle, never grabbing at treats but taking them with his lips. Quick movements startled and disturbed him, so I learned to slow down when walking from room to room and to gesture in the direction I was headed.

Mo learned by watching. Observing the nightly strokes and cuddles I gave Sami, he began to stand close to us and let me scratch just his ears and nose. After several months my patience paid off; he put his head in my lap and, for the first time, I petted him properly.

I Learned To Be Calmer

Mowgli was extremely sensitive to my moods and voice. I learned to be calmer and to speak quietly. On the occasions when I raised my voice to imply he’d done something wrong, that volume was all the punishment he needed — the lesson was learned.

For all his shyness, Mo had a great sense of humor. He loved his squeaky toys, carried them around, slept with them, and amused himself with them. A neighbor told me that whenever I’d leave the house, Mowgli would take his toys out on the deck, arrange them in a tableau, and then rearrange them. I’d come home to these dis­plays, which always made me laugh.

It took a long time to get Mo into my van after his twelve-hour trip home from Best Friends. He did not want to be enclosed like that again. It was almost a year before he finally decided to chance it. I immediately took him to the beach...the first time he ever saw the ocean. After that, car rides were a much-enjoyed activity.

While shy with people, Mo was wonderful with other dogs. Big as he was, he remained completely gentle with dogs we’d encounter, even if they acted aggressively to­ward him. It was magical to watch his calmness calm them down.

Mowgli never acted upset about anything. He’d observe, and you could see him thinking things through. A friend called him a lone wolf, and that fit. Un­like any other dog I’ve had, Mo maintained an aloofness that suggested he wasn’t completely of this world, even though he enjoyed the experiences it offered.

Mowgli was nine when I adopted him, and he weighed 115 pounds. I had known I wouldn’t have him for too many years, but only eighteen months later he developed bone cancer. The most difficult thing for any pet owner is de­ciding if it’s better to help them go than it is to help them stay. Again I took my cue from Mo: as long as he wanted to go for walks, sleep on the deck, and play with his toys, I kept him comfortable.

One day we went for a short walk and then drove next to the beach. He always enjoyed look­ing at the ocean, but this time he was especially attentive. I thought, “He knows it’s the last time he’ll see this.”

We came home, had a long cuddle session, then sat on the deck and watched a beautiful sunset...a peace­ful last evening. When the light caught his eyes, turning them bright turquoise-green, he truly looked like a wolf — ready to embrace his spirit.

Love Has No Time Limits

The next day, before the vet arrived, Mowgli and I settled on the deck with Sami. I told Mo how grateful I was that he had waited for me and came home with me. When the vet finally came, I held Mo’s face cradled on my chest, stroking his head and back. Completely calm, he kept his eyes on me the whole time until he went under, with me whispering, “I love you, Mo,” in his ear.

The last thing Mowgli taught me is that love has no time limits. I loved him for eight years from afar and eighteen months while we were together. It’s been six years since he died, but his place is still here — in my heart — forever.

Photographer Janice Peters specializes in scenic views of Morro Bay and the Central Coast, but also has a wide selection of photos from Alaska to Europe. She offers website and portrait photography as well as scenic note cards. Her work can be seen at Morro Bay Art Association gallery and most local art fairs. Janice was elected Mayor of Morro Bay in 2008 and has been the Coordinator of the Festival Staff for the highly popular and successful Annual Morro Bay Winter Bird Festival. You can visit her website "Janice Peters".