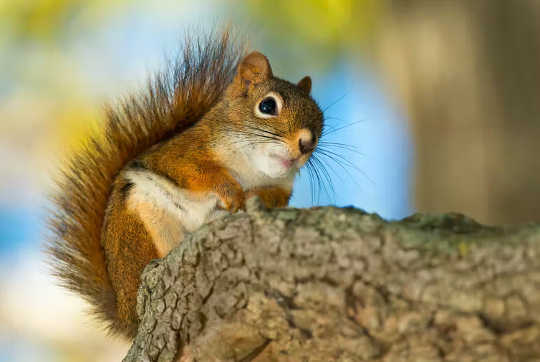 Squirrel rattle calls may be a form of announcing their presence. (Shutterstock)

As a scientist who studies squirrel behaviour, one of the most common questions I am asked is: “How do I get them out of my yard?”

It’s not as easy being a squirrel as you might think. They live a relatively solitary life guarding hard-won food stores to survive the tough winters here in Canada. The behaviour that my students and I are most interested in is how these squirrels use sounds, or what we refer to as vocal communication, to help them make it through this tough life.

The North American red squirrel lives a somewhat solitary life. They spend most of their days in a 50-100 metre territory foraging for pine cones and other food sources like berries and mushrooms.

Individuals spend time gathering cones throughout the summer and fall months, storing them in a central location called a midden. They can be rather protective of these middens, as squirrels are known to steal a great deal from each other. In fact, a squirrel can steal up to 90 per cent of its stores from neighbouring squirrels.

These little thieves run back and forth moving and stealing cones to survive the tough Canadian winters. While they are stealing and storing, squirrels often produce a loud call, termed a rattle. I am keenly interested in this call — my students and I watch and record squirrels to understand what these rattles might be communicating.

Historically it was assumed that this rattle call was produced to make sure that squirrels knew to stay out of each other’s territories — in a sense, a warning that if you enter you may encounter some aggression from the squirrel that lives there. My research has been exploring a slightly different view of this call.

It is possible that the call still warns other squirrels to stay out, but its primary function is to identify the caller to all those who are listening. As a squirrel moves through its own territory, and the territories of its neighbours, they produce intermittent rattle calls. These calls are an announcement of who and where that squirrel is. Listeners then know where their various neighbours are throughout the day. This knowledge can help mitigate costly aggressive interactions, chases and fights.

In behavioural ecology, this is referred to as the “dear enemy” effect, and supposes that in maintaining a territory it is useful to know the relative threat posed by your neighbours versus the threat posed by strangers. In most cases, a known neighbour is far less of a threat than a stranger.

With red squirrels, it has been shown that different neighbours do have different levels of threat. As a result, knowing who your neighbour is by their rattle call reveals the relative threat they represent and therefore the necessary response.

Self-announcement or self-identification is a common vocal behaviour across many different species. Several marine mammal species, such as dolphins and seals, also produce calls that contain information about who is calling. They are used to identify social companions and offspring.

Several species of primates also have calls that contain information about who is calling. Again, these are often used in social interactions to help mitigate aggression during foraging — baboons and capuchin monkeys, for example. So it’s not unusual that a species like the red squirrel would also have information about who is calling to help them with difficult territory interactions.