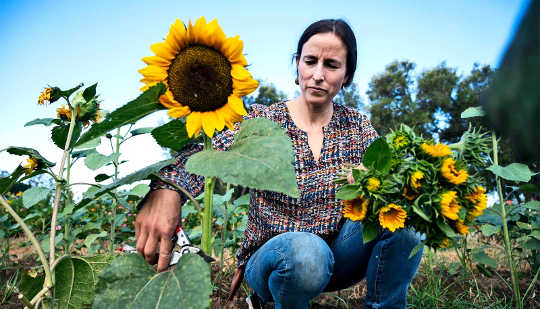 Gardening should be thought of as a public health need, one that could serve communities in future pandemics or disasters. "We need to change the narrative of how urban gardening is framed and elevate it to a key strategy for both environmental and public health," says Alessandro Ossola. (Credit: UC Davis)

People who turned to gardening during the COVID-19 pandemic did so to relieve stress, connect with others, and grow their own food in hopes of avoiding the virus, a new survey shows.

“Connection to nature, relaxation, and stress relief were by far the biggest reasons gardeners cited,” she says.

Researchers sent links to online surveys via targeted emails to gardening groups, in newsletters, and on social media between June and August 2020. They were hoping to gauge the significance of gardening as a way to cope with risk, how the pandemic changed gardening, and what barriers existed.

More than 3,700 gardeners from Australia, Germany, and the United States returned surveys.

COVID connections in the garden

More than half of those responding said they felt isolated, anxious, and depressed during the early days of the pandemic, and 81% had concerns about food access. During this time, people also had more time to garden, and saw the activity as a safe haven and a way to connect socially with others.

“Not only did gardeners describe a sense of control and security that came from food production, but they also expressed heightened experiences of joy, beauty, and freedom in garden spaces,” according to the report, which broke up responses by region or states.

In California, for instance, 33% of gardeners said their plots generated about 25% of their produce needs. Some gardeners with access to large spots to garden also grew food for their community.

Gardening during the pandemic offered a way to socialize safely.

“People found new connections in the garden,” says Lucy Diekmann, an urban agriculture and food systems advisor with UCANR who helped write the report. “It became a shared hobby as opposed to an individual one.”

Responses were fairly similar across all locations, even though the surveys hit in the summer and winter depending on location. “We see remarkable similarities in terms of what people are saying and the way they are interacting with their gardens,” she says.

Many respondents also found it hard to find and buy seeds or plants and locate a spot to grow. The report findings suggest an opportunity for government, community groups, businesses, and others to promote community health by providing green spaces.

Gardening should be thought of as a public health need, one that could serve communities well in future pandemics or disasters. New Zealand, Canada, and some countries in Europe write green prescriptions for people to garden to improve health.

“We need to change the narrative of how urban gardening is framed and elevate it to a key strategy for both environmental and public health,” Ossola says.

Researchers from the Technical University of Munich in Germany, the Commonwealth Science and Industrial Research Organization in Australia, Swinburne University of Technology, the University of Tasmania, and UC Davis contributed to the work.