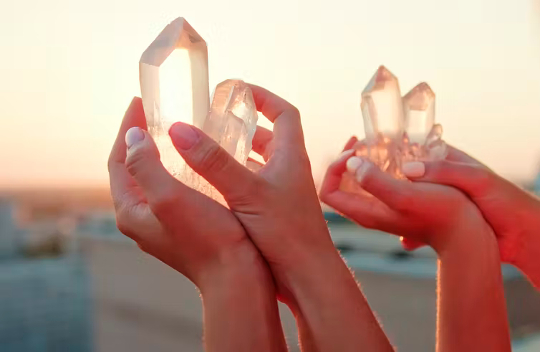 As New York City mayor Eric Adams attends ribbon cuttings, marches in parades and bulldozes dirt bikes, he wears an energy stone bracelet that his supporters gave him. In a recent interview, Adams discussed his belief that New York City has a “special energy” because it sits atop a store of rare gems and stones – the so-called “Manhattan schist,” which is over 450 million years old and contains over 100 minerals.

Adams isn’t the only one imbuing rocks with metaphysical significance. During the first year of the pandemic, the crystal industry boomed, with customers hoping the gems might relieve their anxiety.

Some people might be confused about the allure of these stones. But crystal enthusiasts aren’t deviants. Current ideas about crystals come from a larger tradition called “metaphysical religion” that has always been part of the American spiritual landscape.

Technically, a crystal is any matter with a repeating pattern of atoms or molecules. The crystals for sale in shops are known as euhedral crystals because they have well-defined surfaces, or “faces.”

For centuries, people have attributed special properties to crystals. Scientist Carl Sagan, in his book “The Demon-Haunted World,” traces their modern popularity to a series of books written in the 1980s by Katrina Raphaell, who founded The Crystal Academy of Advanced Healing Arts in 1986.

Crystals aren’t just eye-catching stones. Quartz is used in electronics because it possesses piezoelectric properties that cause it to release an electric charge when compressed. But, as skeptics are quick to point out, there is no evidence crystals can bring health, prosperity or any of the other properties that crystal enthusiasts may attribute to them.

Yet crystals are part of a broader tradition called metaphysical religion, a term coined by historian Catherine Albanese.

Metaphysical religion includes modern New Age movements, a nebulous milieu of alternative spiritual beliefs and practices, such as synchronicity or psychic abilities. Older traditions like Mesmerism, the idea that humans beings emit magnetic energy that can be used for healing, and Spiritualism, the belief that mediums can communicate with the dead, also fall under the metaphysical umbrella.

Albanese ascribes four characteristics to metaphysical traditions: a preoccupation with the mind and its powers; “correspondences,” or the idea of hidden connections between things; a tendency to think in terms of energy and movement; and a yearning for salvation understood as “solace, comfort, therapy, and healing.”

Metaphysical ideas about crystals exhibit each of these characteristics.

While crystals are physical objects, not thoughts, many crystal enthusiasts recommend “cleansing” and “charging” crystals through visualization and other meditative techniques. So the mind plays a key role in crystal spirituality, as it does in other forms of metaphysical religion. 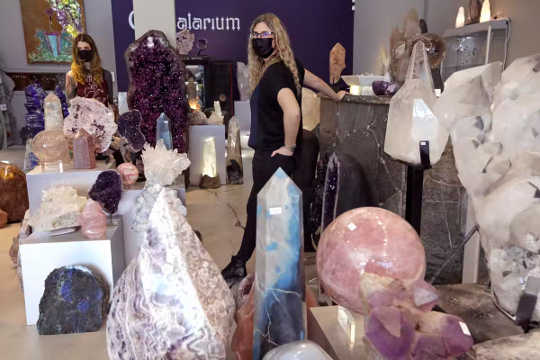 Correspondence refers to the belief found in many occult traditions that ordinary things possess secret qualities or connections to other things. A classic example is astrology, which postulates a correspondence between one’s birthday and certain personality traits. Metaphysical claims about crystals also reflect a belief in correspondences. For example, Colleen McCann, a self-described shaman affiliated with the crystal purveyor Goop, described the positive qualities of different crystals: bloodstones promote good health, rose quartzes help with love, and pink mangano calcites are good for sleep.

Modern crystal enthusiasts often use words like “energy” and “vibrations” that present their ideas in a scientific register. When enthusiasts talk about the energy of crystals – like Eric Adams did – they really mean that it exerts influence within a certain proximity. This is the principle behind crystal water bottles that can be used to “charge” water with “vibrational energy.”

Stripped of scientific language, the logic of energy and vibrations is another form of what anthropologist James Frazer called “contagious magic” found in many cultures, where simply placing one thing next to another is believed to cause an effect.

A source of stigma

Finally, metaphysical religion tends to focus on solving problems in this life rather than the hereafter. This includes health and prosperity, but also emotional growth and well-being. Crystal spirituality is certainly centered around these worldly goals.

This is a big distinction from traditions like Christianity that emphasize salvation in heaven. It is also a factor in why metaphysical ideas are stigmatized despite their popularity.

Protestant Christianity, with its emphasis on “sola fides” – faith alone – has historically dismissed many forms of material religion, or objects with religious significance, as superstition. So in a culture shaped by its historically Protestant majority, some Americans may be predisposed to look at crystal spirituality as foolish, greedy or even blasphemous.

But while claims about the hidden properties of crystals lack scientific validation, so do many of the claims of Christianity and other mainstream religions.

From a historical perspective, Adams’ ideas about crystals don’t make him an outlier. As a scholar of religious studies, I see him as a normal part of the American religious landscape. Why Are People Starting To Believe In UFOs Again?

by Joseph P. Laycock, Texas State University
The 1990s were a high-water mark for public interest in UFOs and alien abduction. Shows like “The…