Why Keeping Chickens At Home Is Risking Bird Flu 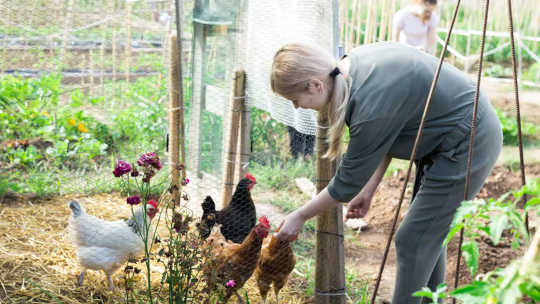 Backyard chicken-keeping has seen an increase in popularity in the last decade. BearFotos/ Shutterstock

Bird flu cases have been on the rise recently, with reports of outbreaks in the UK, China, mainland Europe and Israel. Outbreaks typically happen in commercial flocks, such as in large-scale poultry farming operations – which is why bird flu is often only a concern to people working in these professions. But with a growing number of people now keeping chickens and other birds in their backyards, the close contact they have with their birds could potentially be putting them at risk of contracting and spreading bird flu too.

This was never more evident than when it was reported that a 79-year-old English man had recently tested positive for the H5N1 strain of bird flu. H5N1 is a strain of bird flu which is mild in wild birds, but much more deadly in domestic birds. If it infects humans, it has a mortality rate of 53%. The man lived with around 20 ducks in his Devon home, with another 100 elsewhere on his property. While the man is still alive, the ducks were culled to prevent further spread.

Current bird flu biosecurity measures focus primarily on large-scale poultry farming. But with outbreaks becoming more common and more severe, the risks are increasing – and may actually be found much closer to home.

Backyard chicken-keeping has been on the rise in Britain for at least a decade. Numbers peaked during the COVID-19 lockdown in 2020 as people flocked to get backyard hens both as a hobby, and to have ready access to food.

In the UK, domestic flocks do not need to be registered with the Department for Environment, Food and Rural Affairs (Defra) on The Great Britain Poultry Register unless there are more than 50 birds. Voluntary registration is however encouraged for backyard keepers specifically so that they can be notified of disease outbreaks. The poultry register was introduced in 2006 and is used specifically to manage disease outbreaks in all commercial birds, including chickens, ducks, turkey, geese and quail.

Bird flu spreads primarily to domestic flocks from water birds such as ducks and geese, who spend spring and summers mixing in Siberia. When they migrate to Britain in the autumn, they bring influenzas with them. These viruses spread through faeces and saliva, which is why separating domestic flocks from wild birds is essential during outbreaks.

This is why during outbreaks – as in November 2021 – Defra and the Animal and Plant Health Agency (APHA) might impose an Avian Influenza Protection Zone (AIPZ). This means all captive birds are legally required to be kept indoors until the outbreak is over, usually in the spring. While Defra points out that backyard hens are subject to these restrictions, the AIPZ is written with commercial flocks in mind.

Since most backyard flocks are made up of just a handful of birds, keepers often believe that their risk of bird flu is low. When the AIPZ restrictions came into force in November, I was interviewing domestic chicken keepers. Most understood that the measures were put in place to ensure birds were kept safe and to stop the spread of the virus, but many also felt the AIPZ didn’t apply to them because they only have a handful of birds. Some even felt that their risk of contracting bird flu was low because of their small flock numbers.

But home flocks are still vulnerable to infection – especially from interactions with wild bird populations. And if owners don’t take precautions, they can catch it themselves.

Infection of bird flu in humans is rare. Since 2003, there have been just 863 cases of human infection reported from 18 countries. But the growth of domestic flocks might be a potential new reservoir for disease. Another issue is that infections might go unreported – not just because birds die quickly, but due to owners fearing that beloved pets may be culled. This is why it will be important in the future for Defra and APHA to provide specific policy for backyard chicken keeping.

But this doesn’t mean that there aren’t still many things that backyard chicken keepers can do to protect themselves and their birds, including:

Bird flu season usually lasts until the spring, when migratory birds leave Britain’s shores. Given the risks that backyard chicken keepers might also experience, it’s important to follow any rules set in place to curb the spread of this disease.