When did humans start experimenting with alcohol and drugs? 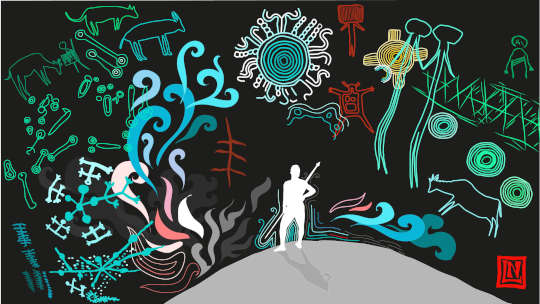 Humans constantly alter the world. We fire fields, turn forests into farms, and breed plants and animals. But humans don’t just reshape our external world – we engineer our internal worlds, and reshape our minds.

One way we do this is by upgrading our mental “software”, so to speak, with myths, religion, philosophy and psychology. The other is to change our mental hardware – our brains. And we do that with chemistry.

Today, humans use thousands of psychoactive compounds to alter our experience of the world. Many derive from plants and fungi, others we manufacture. Some, like coffee and tea, increase alertness; others, like alcohol and opiates, decrease it. Psychiatric drugs affect mood, while psychedelics alter reality.

We alter brain chemistry for all kinds of reasons, using substances recreationally, socially, medicinally, and ritually. Wild animals sometimes eat fermented fruit, but there’s little evidence that they eat psychoactive plants. We’re unusual animals in our enthusiasm for getting drunk and high. But when, where and why did it all start?

High on life in the Pleistocene

Given humanity’s love of drugs and alcohol, you might assume getting high is an ancient, even prehistoric tradition. Some researchers have suggested prehistoric cave paintings were made by humans experiencing altered states of consciousness. Others, perhaps inspired more by hallucinogens than hard evidence, suggest that drugs triggered the evolution of human consciousness. Yet there’s surprisingly little archaeological evidence for prehistoric drug use.

African hunter-gathers – Bushmen, Pygmies and the Hadzabe people – likely live their lives in ways similar to ancestral human cultures. The most compelling evidence for the use of drugs by such early humans is a potentially hallucinogenic plant !kaishe, used by Bushmen healers, which supposedly makes people “go mad for a while”. Yet how much Bushmen historically used drugs is debated, and otherwise, there’s little evidence for drug use in hunter-gatherers.

The implication is that, despite Africa’s diverse plants and fungi, early humans used drugs rarely, maybe to induce trances during rituals, if at all. Perhaps their lifestyle meant they rarely felt the need for escape. Exercise, sunlight, nature, time with friends and family – they’re powerful antidepressants. Drugs are also dangerous; just as you shouldn’t drive drunk, it’s risky to get high when lions lurk in the bush, or a hostile tribe waits one valley over.

Migrating out of Africa 100,000 years ago, humans explored new lands and encountered new substances. People discovered opium poppies in the Mediterranean, and cannabis and tea in Asia. 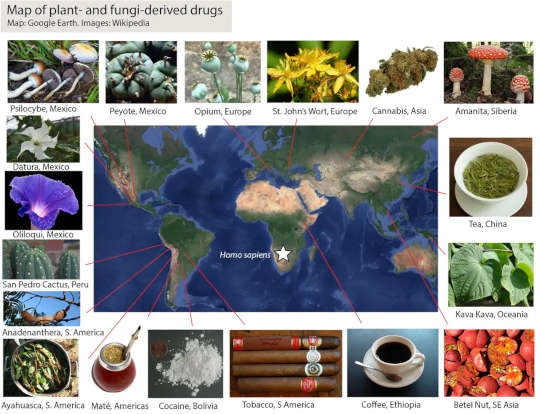 Archaeologists have found evidence of opium use in Europe by 5,700 BC. Cannabis seeds appear in archaeological digs at 8,100 BC in Asia, and the ancient Greek historian Herodotus reported Scythians getting high on weed in 450 BC. Tea was brewed in China by 100 BC.

It’s possible our ancestors experimented with substances before the archaeological evidence suggests. Stones and pottery preserve well, but plants and chemicals decay quickly. For all we know, Neanderthals could have been the first to smoke pot. But archaeology suggests the discovery and intensive use of psychoactive substances mostly happened late, after the Neolithic Revolution in 10,000 BC, when we invented farming and civilisation. 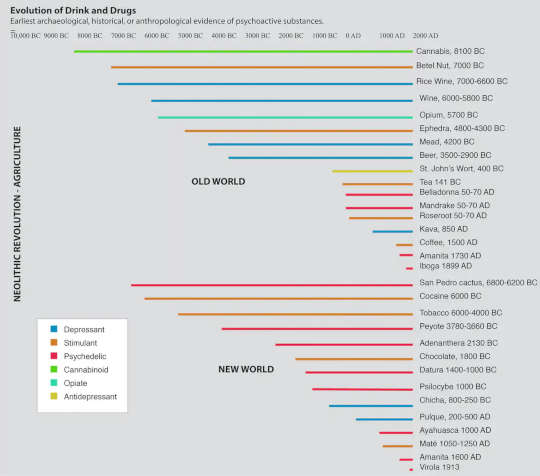 When hunters trekked across the Bering Land Bridge 30,000 years ago into Alaska and headed south, they found a chemical cornucopia. Here, the hunters discovered tobacco, coca and maté. But for some reason, indigenous Americans were especially fascinated with psychedelics.

This American psychedelic culture is ancient. Peyote buttons have been carbon-dated to 4,000 BC, while Mexican mushroom statues hint at Psilocybe use in 500 BC. A 1,000 year-old stash found in Bolivia contained cocaine, Anadenanthera and ayahuasca – and must’ve been one hell of a trip.

A huge step in the evolution of debauchery was the invention of agriculture, because farming made booze possible. It created a surplus of sugars and starches which, mashed and left to ferment, magically transformed into potent brews.

Humans invented alcohol many times independently. The oldest booze dates to 7,000 BC, in China. Wine was fermented in the Caucasus in 6,000 BC; Sumerians brewed beer in 3,000 BC. In the Americas, Aztecs made pulque from the same agaves used today for tequila; Incas brewed chicha, a corn beer.

While in America psychedelics appear to have been particularly important, Eurasian and African civilisations seem to have preferred alcohol. Wine was central to ancient Greek and Roman cultures, was served at Plato’s Symposium and at the Last Supper, and remains incorporated in the Jewish Seder and Christian communion rituals.

It’s possible large civilisations simply drive innovation of all kinds: in ceramics, textiles, metals – and psychoactive substances. Perhaps alcohol and drugs also promoted civilisation – drinking can help people socialise, altered perspectives encourage creativity, and caffeine makes us productive. And it may just be safer to get drunk or high in a city than the savannah.

A darker possibility is that psychoactive substance use developed in response to civilisation’s ills. Large societies create large problems – wars, plagues, inequalities in wealth and power – against which individuals are relatively powerless. Perhaps when people couldn’t change their circumstances, they decided to change their minds.

It’s a complex problem. Just thinking about it makes me want to grab a beer. Enjoying and Appreciating All That Is

by Marie T. Russell
Life can be stressful. It can and does present challenges. It also brings pleasures and laughter,…

How Old Would You Be If You Didn’t Know Your Age?

by Barbara Berger
How old would you be if you didn't know your age? It’s an interesting thought isn’t it? Why not…

Embarking On A Maiden Voyage Is Scary