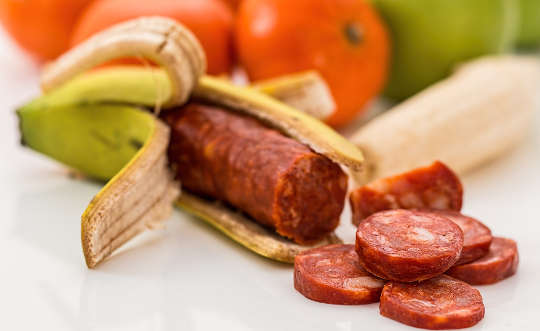 Processed diets, which are low in fiber, may initially reduce the incidence of foodborne infectious diseases such as E. coli infections, but might also increase the incidence of diseases characterized by low-grade chronic infection and inflammation such as diabetes, a study with mice shows.

Gut microbiota, the microorganisms living in the intestine, provide a number of benefits, such as protecting a host from infection by bacterial pathogens. A variety of environmental factors, especially diet, influences these microorganisms, and they rely heavily on complex carbohydrates such as fiber.

The Western-style diet, which contains high amounts of processed foods, red meat, high-fat dairy products, high-sugar foods, and pre-packaged foods, lacks fiber, which is needed to support gut microbiota. Changes in dietary habits, especially a lack of fiber, are believed to have contributed to increased prevalence of chronic inflammatory diseases such as inflammatory bowel disease, metabolic syndrome, and cancer.

In this study, the researchers found switching mice from a standard grain-based rodent chow to a high-fat, low-fiber Western-style diet resulted in a rapid reduction in the number of gut bacteria.

Mice fed the Western-style diet were frequently unable to clear the pathogen Citrobacter rodentium from the colon. They were also prone to developing chronic infection when re-challenged by this pathogen.

The researchers conclude the Western-style diet reduces the numbers of gut bacteria and promotes encroachment of microbiota into the intestine, potentially influencing immune system readiness and the body’s defense against pathogenic bacteria.

“We observed that feeding mice a Western-style diet, rather than standard rodent grain-based chow, altered the dynamics of Citrobacter infection, reducing initial colonization and inflammation, which was surprising. However, mice consuming the Western-style diet frequently developed persistent infection that was associated with low-grade inflammation and insulin resistance,” says senior coauthor Andrew Gewirtz, a professor in the Institute for Biomedical Sciences at Georgia State University.

“These studies demonstrate potential of altering microbiota and their metabolites by diet to impact the course and consequence of infection following exposure to a gut pathogen.”

“We speculate that reshaping gut microbiota by nutrients that promote beneficial bacteria that out-compete pathogens may be a means of broadly promoting health,” says senior coauthor Jun Zou, an assistant professor in the Institute for Biomedical Sciences.

The findings appear in the journal PLOS Pathogens.

The National Institutes of Health and the American Diabetes Association funded the work. Original Study by Evangeline Mantzioris
Nutritionists will tell you to eat a rainbow of fruit and vegetables. This isn’t just because it… Some Reasons to Include Pumpkins in your Diet

by Hazel Flight
Pumpkins are synonymous with autumn. But while most of us associate them with Halloween, pie and… by John Cryan
When it comes to dealing with stress, we’re often told the best things we can do are exercise, make…