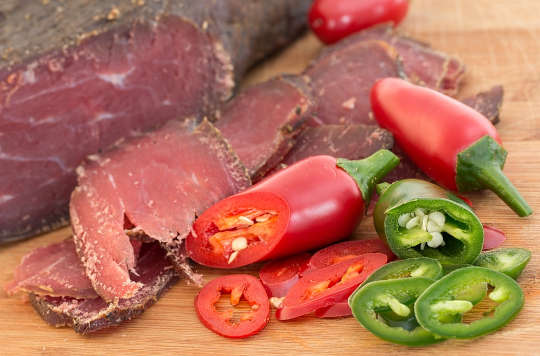 Foods such as cheese and processed meats can infect sites of intestinal damage in mice and people with Crohn’s disease and prevent healing, according to new research.

The new study also shows that treating infected mice with antifungal medication eliminates the fungus and allows the wounds to heal.

Eating is a dangerous business. Naturally occurring toxins in food and potentially harmful foodborne microbes can do a number on our intestines, leading to repeated minor injuries. In healthy people, such damage typically heals in a day or two. But in people with Crohn’s disease, the wounds fester, causing abdominal pain, bleeding, diarrhea, and other unpleasant symptoms.

“We’re not suggesting that people stop eating cheese and processed meat; that would be going far beyond what we know right now,” says first author Umang Jain, an instructor in pathology and immunology at the School of Medicine at Washington University in St. Louis.

“What we know is that this foodborne fungus gets into inflamed, injured tissue and causes harm. We’re planning to perform a larger study in people to figure out if there’s a correlation between diet and the abundance of this fungus in the intestine. If so, it is possible dietary modulation could lower levels of the fungus and thereby reduce symptoms of Crohn’s disease.”

Crohn’s is a subtype of inflammatory bowel disease. As the name suggests, it is driven by chronic inflammation in the digestive tract and primarily treated with immunosuppressive medications. Crohn’s patients endure repeated cycles of gastrointestinal symptom flare-up and remission. During a flare, their digestive tracts are dotted with inflamed, open sores that can persist for weeks or even months.

To understand why intestinal ulcers take so long to heal in some people, Jain and senior author Thaddeus Stappenbeck, formerly at Washington University and now at the Cleveland Clinic, studied mice whose intestines had been injured.

By sequencing microbial DNA at the site of injury, they discovered that the fungus Debaryomyces hansenii was abundant in wounds but not in uninjured parts of the intestine.

People acquire the fungus through their food and drink, Jain says. D. hansenii is commonly found in all kinds of cheeses, as well as sausage, beer, wine, and other fermented foods.

Further experiments showed that introducing the fungus into mice with injured intestines slowed down the healing process, and that eliminating D. hansenii with the antifungal drug amphotericin B sped it up.

In a separate analysis of 10 Crohn’s patients involving tissue samples of both inflamed and uninflamed areas of the gut, the researchers found the fungus in samples from all of the patients but only at sites of injury and inflammation.

“If you look at stool samples from healthy people, this fungus is highly abundant,” Jain says. “It goes into your body and comes out again. But people with Crohn’s disease have a defect in the intestinal barrier that enables the fungus to get into the tissue and survive there. And then it makes itself at home in ulcers and sites of inflammation and prevents those areas from healing.”

The findings suggest that eliminating the fungus might restore normal wound healing and shorten flare-ups. While the drug amphotericin B was effective at eliminating the fungus in mouse studies, it is not widely used in people because it can only be given intravenously. The researchers are working with chemists to develop an effective antifungal that can be taken by mouth. They also are studying whether there is a link between diet and the amount of the fungus in people’s digestive tracts.

“Crohn’s disease is fundamentally an inflammatory disease, so even if we figured out how to improve wound healing, we wouldn’t be curing the disease,” Jain says. “But in people with Crohn’s, impaired wound healing causes a lot of suffering. If we can show that depleting this fungus in people’s bodies—either by dietary changes or with antifungal medications—could improve wound healing, then it may affect the quality of life in ways that we’ve not been able to do with more traditional approaches.”

The Crohn’s & Colitis Foundation, Lawrence C. Pakula, IBD Innovation, the National Institutes of Health, the US Department of Veterans Affairs, and the American College of Gastroenterology funded the work. by Tamara Bhandari
Belly fat affects the odds of women surviving kidney cancer but not men, a new study shows. Bigger portions may get kids to eat more veggies

by Katie Bohn-Penn State
It can be difficult to get young kids to eat enough vegetables, but a new study finds that simply… How You Cook Bacon Could Partially Lower Cancer Risk

by Richard Hoffman, University of Hertfordshire
Bacon is a much-loved, comforting breakfast item – during the global pandemic, sales have surged in… by Duane Mellor, Lead for Evidence-Based Medicine and Nutrition, Aston Medical School, Aston University
Since the beginning of the pandemic, it’s been suggested that certain foods or diets may offer…