Is Eating Out Devouring Your Food Budget? 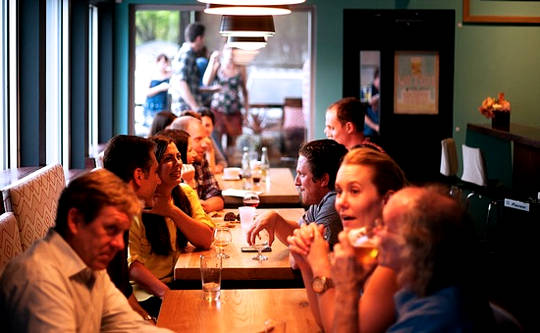 If you were to guess how much you spend on eating out per month, chances are you’ll miss the mark by a quite a bit.

In a recent study, I found that adults tend to underestimate how much they spend on eating out by more than twice what they’re actually spending.

This is a significant chunk of cash. So why is there such a big gap between how much we think we spend and how much we actually spend? And how could it be bridged?

When ‘mental accounting’ doesn’t add up

Self-control isn’t easy, but one way that people try to control how much they spend is by using mental constraints – or rules of thumb – to prevent themselves from spending too much.

“Mental accounting,” a concept first proposed by Nobel Laureate in Economics Dr. Richard Thaler, describes how we create a mental ledger for our various monthly budgets, whether it’s food (eating out or buying groceries), transportation (walking or taking a cab) or entertainment (going to the theater or staying in to watch a movie).

Given the brain’s enormous capabilities, you’d expect mental accounting to be pretty effective. Unfortunately, it’s not always helpful in self-control.

Its difficult to resist the temptation to consume, particularly when we’re enticed in so many ways. Think about holiday shopping: You’re at the mall, you’re hungry, you pass the food court – and catch a whiff of french fries. Sure, you have leftovers back home. But it’s so quick and easy to buy a meal right then and there. A combination of environmental stimulation and a lack of self-control can cause people to act impulsively.

A problem most aren’t aware of

In my study, I found evidence to show the limitations of mental accounting.

First I asked participants to estimate their weekly budgets for eating out. Several days later, I asked them the same question. But during the interim, I also had them report, each day, whether they ate out or not, and how they felt about their financial well-being.

By having them make daily notes, it alerted to them to how often they were eating out. So when it came time to ask them, again, to estimate their weekly budget for eating out, the estimates were, on average, more than two times higher than their first estimate. The participants thought they knew how much they were spending on food away from the home, only to later increase their estimates.

My study also found that those who tended to eat out more overall had a bigger gap between their first and second reported budgets. In other words, the more they ate out, the more they underestimated how much they were spending on eating out.

How US Policy Is Shifting Toward Nutrition For Better Health

Are Superfoods Really All That Super?

Perhaps most surprisingly, many of the participants weren’t even aware that there was a big difference between their first and second budgets.

This phenomenon matters because around the world, people are eating out more than at any point in modern human history. According to most estimates, it constitutes as much (or more) than 45 percent of food expenditures in the United States.

More importantly, studies have shown that those earning less tend to spend a greater proportion of their disposable incomes on eating out. And while eating out doesn’t necessarily need to be unhealthy, people often aren’t aware what’s in the prepared meals we’re buying from restaurants, markets and cafeterias. Researchers are still studying the health consequences of eating out, but they do know that selecting a meal from a menu immediately limits food choices, which could lead to less healthy food decisions.

Relying less on mental accounting is a good first step. Writing out a weekly or monthly food budget can reverse these trends. (There are also apps that can help with this.)

One way to get a snapshot of your eating out behavior is to track it over the course of a week or two. Make a note every time you eat out, documenting how much you spend, who you eat with and what you order. Understanding the patterns of your choices and behaviors will make lifestyle changes seem less daunting, and self-control more manageable.

The challenges of self-control aren’t new, of course. The Greek philosopher Plato once said, “The first and best victory is to conquer self.”

But in a culture that implores people to “let loose” and “live a little,” self-control shouldn’t be equated with self-punishment. I like to point to a maxim of celebrated chef Julia Child: “You must have discipline to have fun.” Does Your Neighborhood Have Greater Diabetes Risk? by Marinka Steur and Nita Forouhi, University of Cambridge
One diet change commonly recommended by experts is to eat fewer saturated fats – and instead… How Salt Affects Your Brain When You Eat Salty Food

by Jennifer Rainey Marquez, Georgia State
New research about the relationship between neuron activity and blood flow deep in the brain, as… Coming Into Balance within the Changes of Worlds

Wise Emotion: A Sensitive and Emotional Eclipse in Pisces

by Sarah Varcas
When the Moon is eclipsed we may lose touch with our inner compass. When eclipsed in Pisces, even…