Why Do Strawberries Taste So Good? 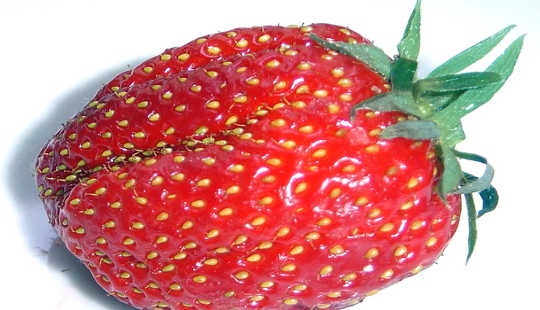 Each year, spectators at the Wimbledon tennis tournament get through a whopping 30 tons of strawberries in the course of a summer fortnight. It is no wonder that the association between Wimbledon and strawberries is such a marketing triumph. But why do we fall for it?

Scientists have actually worked out what it is we love so much about strawberries by pinning down the molecular basis of the its aroma. This can also explain why wild strawberries often taste better than shop-bought ones. The good news is that the work is helping them uncover how to make them even more delicious.

Strawberries have a long and proud history – even the ancient Romans ate them. We know this from the works of poets Virgil and Ovid, which referred to them as fraga. The medieval artist Hieronymus Bosch had several strawberries in his triptych the “Garden of Earthly Delights”, painted around 1500.

The most common type of strawberries we eat today came to us by coincidence via the transatlantic explorations of Christopher Columbus and his successors. First the very hardy Virginia strawberry (Fragaria Virginiana), a native of North America, reached Europe in the 17th century. Then early in the 18th century, the large Chilean strawberry (Fragaria Chiloensis) came to France.

As a result of an initial fortuitous pollination, these two species were crossed, giving rise to the cultivated strawberry we eat today, Fragaria ananassa, sometimes known as the “garden strawberry”. This combined in one fruit two particular traits inherited from its forerunners: hardiness and large fruit.

The Chemistry Of Taste And Smell

When I was young – in the 1950s – you only saw strawberries in the shops for a couple of weeks of the summer, roughly coinciding with Wimbledon. Now we have them all the year round.

This is because strawberry breeders have been aiming for fruit with particular (and marketable) properties such as uniform appearance, large fruit, freedom from disease and long shelf-life. But by concentrating on genetic factors that favour these qualities, other genes have been lost, such as some of the genes responsible for flavour.

The balance of sweetness and acidity is very important to the taste of a strawberry. As strawberries ripen, their sugar content rises from about 5% in unripe green fruit to 6–9% on ripening. At the same time, the acidity decreases, meaning ripe strawberries taste much sweeter.

The ripening process is controlled by a hormone called auxin. When its activity reaches its peak, it causes the cell wall to degrade and so a ripe strawberry becomes juicy as well as sweet. At the same time, gaseous molecules from the strawberries make their way up the back of the throat to our nose when we chew on them, where they plug into “smell receptors".

But how do scientists know which molecules are responsible for taste and smell? More than 350 molecules have been identified in the vapour from strawberries – and around 20 to 30 of those are important to their flavour.

Unlike raspberries, there is no single molecule with a “strawberry smell”. So what we smell is a blend – these molecules together give the smell sensation we know as “strawberry”. Chemists made up a model strawberry juice containing what they thought were the most important odorants, at the same concentration found in the original juice extract. Sensory testers agreed that this model closely matched the real extract.

They then made up a series of new mixtures, each containing 11 of the 12 main odorants, with a different molecule missing from each. The testers could therefore find out if omitting that molecule made any difference to the odour. For example, leaving out 2,5-dimethyl-4-hydroxy-3(2H)-furanone or (Z)-3-hexenal was noticed by virtually all the testers – and omitting compounds known as esters – chemical compounds – such as methyl butanoate, ethyl butanoate or ethyl 2-methylbutanoate were also spotted by most.

This analysis led to the characterisation of basic sensory impressions of strawberries. One of these was a sweet caramel-like scent, which is due to two molecules with a structure containing five-membered rings of carbon atoms called furaneol and mesifuran.

Another impression was a fruity scent, due to the esters, which are responsible for the aroma of many other fruit, including banana and pineapple. They can make up 90% of the aroma molecules from a strawberry. It’s important that the contribution of the esters are balanced – too much gamma-decalactone for example, and the strawberries will start to taste like peaches. The analysis also pinpointed a green note due to (Z)-3-hexenal responsible for the smell of “cut grass”.

It turns out that while this fruit may not look so good, it produces a greater quantity of flavour molecules, as well as molecules that are not found in many of the strawberries we buy in the shop. Methyl anthranilate is one of these, it is also found in grapes and contributes a strong and sweetish edge to the aroma. Another is methyl cinnamate with a spicy note.

In their quest for better tasting fruit, scientists are starting to investigate the genes responsible for making particular flavour molecules.

Some 20 years ago, experiments on the effect of adding cream to the flavour of fresh raspberries were carried out. These found that heating enhanced raspberry aroma, but adding cream decreased it.

While this exact experiment does not seem to have been carried out in strawberries, scientists working with the food chain Morrisons recently reported that the perfect strawberry-to-cream weight ratio is 70:30. What’s more, you should eat it within two minutes and 50 seconds of serving, before the strawberries start to get soggy and shrink. Perhaps you should carry out this experiment yourself this summer? Enjoy your strawberries.

Simon Cotton is Senior Lecturer in Chemistry at University of Birmingham. He taught for some 30 years in state and independent secondary schools and has been closely involved in promoting chemistry, whether visiting feeder schools with activities such as Magic Shows, or by extension through his lectures and writing.