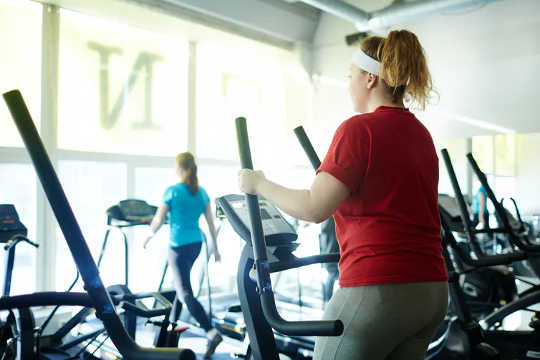 Exercise is good for you, no matter what your weight. Pressmaster/Shutterstock Tim Olds, University of South Australia

Nike’s London store recently introduced a plus-sized mannequin to display its active clothing range which goes up to a size 32.

The mannequin triggered a cascade of responses ranging from outrage to celebration. One side argues that the mannequin normalises obesity and leads obese people to feel that they are healthy when in fact they are not.

The other side argues the representations are inclusive, combat fat stigma and encourage fat women to exercise.

Both arguments have some merit.

The representations of bodies we see around us — including shop mannequins – affect the way we calibrate our sense of what is normal and acceptable. And obesity is indeed associated with a greater risk of heart disease, stroke, type 2 diabetes and early death.

On the other hand, exercise is almost universally beneficial, and people of all shapes and sizes should be encouraged to participate.

Overweight and obesity have become the new normal

Based on body mass index (BMI), about two-thirds of Australian adults and one-quarter of kids are overweight or obese. While this proportion has flattened out for children in the last 20 years, it continues to rise for adults.

Why Time Scarcity Is A Slippery Slope To Inactivity

There is strong evidence parents consistently misjudge the weight status of their children because they see more and more fat kids.

The same is true for adults: a recent study from the United Kingdom found 55% of overweight men and 31% of overweight women considered their weight to be in the healthy range.

I would guess the Nike mannequin is close to 100 kg, with a BMI maybe in the low 30s, well into the obese category.

But given the average female shop mannequin has a BMI of about 17, there are probably at least ten times as many Australian women like the plus-size mannequins than like the usual minus-size variety.

Obesity is necessarily the result of behaviours — eating too much, exercising too little — albeit heavily constrained by genetic predispositions, and social and economic pressures.

But unlike, say, smoking, being fat is also part of what a person is: most people who are fat have usually been fat for a long time. It’s not something a person has complete control over.

Divergent paths into fat and lean start very young, and once you’re on the obesity train it’s hard to get off.

While it is possible to “give up obesity”, for many it can be a very hard road, involving a lifelong struggle with hunger and recidivism.

Anti-obesity campaigns that are built on disgust, fear or shame – such as Measure Up – have been criticised as being stigmatising, ethically problematic and ineffective.

There has, to my knowledge, been no high-quality research comparing the actual effectiveness of shaming versus empowering anti-obesity, or pro-physical activity, campaigns.

However a number of studies show, unsurprisingly, that obese and inactive people prefer empowering campaigns, find them more motivating and less stigmatising.

Depending on definitions, about 25-50% of obese people have “metabolically healthy obesity” – normal levels of inflammation, blood sugar, insulin, blood fats, and blood pressure. Other than being obese, these people appear healthy.

But obese people — fit or unfit, active or not — remain on average at greater risk of heart disease, diabetes and early death than lean people with similar behaviours.

Similarly, the claim that people can be both fit and fat, and that fit, fat people are at less risk than unfit, lean people depends on how we define fitness and fatness.

But if another study compares obese people in the top 50% of fitness to lean people in the bottom 50%, the fatter people will be much less healthy.

What is certain is that whoever you are, exercise will almost certainly improve your health.

The Nike mannequin controversy is a morality tale of how we navigate between the devil of normalising obesity and the deep blue sea of excluding obese people from the world of exercise.

Obesity has been called both a disability and a disease, and just another way of being in the world. The reality is that for most people, it’s something in between. by Lindsay Bottoms, University of Hertfordshire
Many of us have smartwatches or apps on our phones that count the number of steps we do. Usually,… by Robert Jennings, InnerSelf.com
I haven't bought products from Exxon knowingly in nearly 30 years except for a couple times for…

by Marie T. Russell
I remember as a child that when evening would come and I would see the first star, I would happily…

Claim Your Inheritance and Let Life Love You