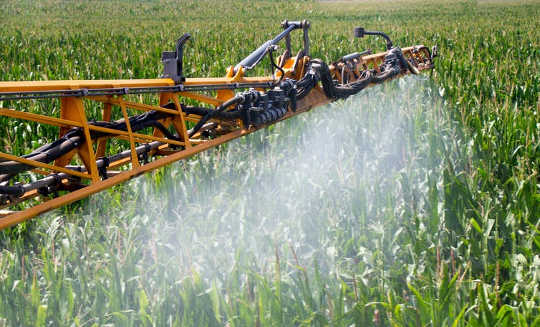 New Zealand researchers have found that the active ingredients in commonly-used weed killers like Round-up and Kamba can cause bacteria to become less susceptible to antibiotics. photo credit: shutterstock.com, CC BY-ND

Antibiotics are losing their ability to kill bacteria.

One of the main reasons for the rise in antibiotic resistance is the improper use of antibiotics, but our latest research shows that the ingredients in commonly-used weed killers like Round-up and Kamba can also cause bacteria to become less susceptible to antibiotics.

Already, about 700,000 deaths are attributable each year to infections by drug-resistant bacteria. A recent report projected that by 2050, 10 million people a year will die from previously treatable bacterial infections, with a cumulative cost to the world economy of $US100 trillion.

When bacteria were exposed to commercial herbicide formulations based on 2,4-D, dicamba or glyphosate, the lethal concentration of various antibiotics changed. Often it took more antibiotic to kill them, but sometimes it took less. We showed that one effect of the herbicides was to induce certain genes that they all carry, but don’t always use.

These genes are part of the so-called “adaptive response”. The main elements of this response are proteins that “pump” toxins out of the cell, keeping intracellular concentrations sublethal. We knew this because the addition of a chemical inhibitor of the pumps eliminated the protective effect of the herbicide.

In our latest work, we tested this by using gene “knockout” bacteria, which had been engineered to lose just one pump gene. We found that most of the effect of the herbicide was explained by these pumps.

Reduced antibiotic use may not fix the problem

For decades we have put our faith in inventing new antibiotics above the wisdom of preserving the effectiveness of existing ones. We have applied the same invention incentives to the commercialisation of antibiotics as those used with mobile phones. Those incentives maximise the rate of product sales. They have saturated the market with phones, and they saturate the earth with antibiotic resistant bacteria.

Improper use of antibiotics is a powerful driver of the widespread resistance. Knowing this naturally leads to the hypothesis that proper and lower use will make the world right again. Unfortunately, the science is not fully on the side of that hypothesis.

Studies following rates of resistance do generally find a decrease in resistance to specific drugs when their use is banned or decreased. However, the effect is not a restoration of a pre-antibiotic susceptibility, characterised by multi-year effectiveness of the antibiotic. Instead, resistance returns rapidly when the drug is used again.

This tells us that once resistance has stablised in populations of bacteria, suspended use may change the ratio of resistant to susceptible but it does not eliminate resistant types. Very small numbers of resistant bacteria can undermine the antibiotic when it is used again.

Herbicides and other pollutants mimic antibiotics

What keeps these resistant minorities around? Recall that bacteria are very small, but there are lots of them; you carry 100 trillion of them. They are also found deep underground to high up in the atmosphere.

Because antibiotics are so powerful, they eliminate bacteria that are susceptible and leave the few resistant ones to repopulate. Having done so, we now have lots of bacteria, and lots of resistance genes, to get rid of, and that takes a lot of time.

As our work suggests, the story is even more complicated. We are inclined to think of antibiotics as medicine and agrichemicals, hand soaps, bug sprays and preservatives as different. Bacteria don’t do this. To them, they are all toxic.

Some are really toxic (antibiotics) and some not so much (herbicides). Bacteria are among the longest lived organisms on earth. Nearly four billion years of survival has taught them how to deal with toxins.

Our hypothesis is that herbicides immunise the bacteria from more toxic toxins like antibiotics. Since all bacteria have these protections, the use of widely used products to which they are exposed is particularly problematic. So these products, among others, might keep bacteria ready for antibiotics whether or not we are using them.

We found that both the purified active ingredients and potential inert ingredients in weed killers caused a change in antibiotic response. Those inert ingredients are also found in processed foods and common household products. Resistance was caused below legally allowed food concentrations.

What does this all mean? Well for starters we may have to think more carefully about how to regulate chemical commerce. With approximately eight million manufactured chemicals in commerce, 140,000 new since 1950, and limited knowledge of their combination effects and breakdown products, this won’t be easy.

But neither is it easy to watch someone die from an infection we lost the power to cure. My Experiment in Forced Simplicity

by Barry Vissell
For someone so inspired by the poverty and simplicity of St. Francis, it’s embarrassing for me to…

by Alan Seale
In the mid-1960s, Bob Dylan’s song, “The Times They Are A-Changin,” became an anti-establishment…