Health And Neighborhoods Are Too Often Linked 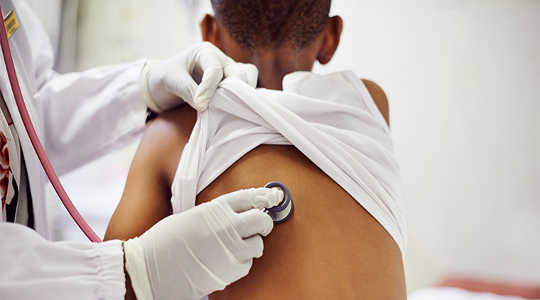 As an emergency room physician in Washington, D.C., it didn’t take long for Leana Wen to notice a pattern: Patients making repeat visits to the ER, wheezing and coughing from asthma exacerbations or suffering from lead poisoning, conditions that most often afflict those living in low-income neighborhoods.

She helped soothe her patients’ immediate needs, but she was acutely aware she was only providing temporary relief, leaving the root causes unchecked — and a gap in the health of residents living in the city’s poorest ZIP codes versus those in the wealthiest. She wanted the opportunity to intervene earlier in those ER patients’ lives.

“If a child is lead poisoned to start with … it’s hurting that child’s chances before they begin,” she says.

In order to interrupt that cycle of repeat emergency visits for preventable health problems, Wen left the ER in D.C. to lead the Baltimore City Health Department in 2015, where she is looking for long-term solutions to end the disparities in health associated with ZIP codes.

The environment in which people live, work and play is a leading predictor of life span; one meta-analysis showed that researchers in almost 50 studies found that social determinants of health, which include physical environment, account for over one-third of deaths in the United States every year.

Across the U.S., public health professionals are seeking to reduce inequities in the way our environments affect our health. While advocates for public health have long been concerned with factories in poor neighborhoods and residential streets that butt up against freeways, the newest programs focused on social health determinants address a wide variety of issues — from Zika prevention to crowd-sourced air quality apps to building awareness of the hazards of lead paint.

“There is a silver lining,” says Peter Hotez, dean of the National School of Tropical Medicine at Baylor College of Medicine in Houston and author of the book Blue Marble Health: An Innovative Plan to Fight Diseases of the Poor Amid Wealth. “This isn’t a resource problem; the funds are there. It’s a political willpower problem.”

Hotez says it’s time for a shift in the way we think about global health. Huge progress has been made on improving some aspects of health; now the focus needs to turn to diseases that strike hardest at those living in poverty.

Across the U.S. people are trying to find both the resources and will to solve this environmental justice issue. Here’s a closer look at some of them.

Detroit’s unique challenges include a high vacancy rate across a large area as well as a dropping population. Higher density is a strong predictor of urban health, El-Sayed says, because services that provide basic needs, such as grocery stores, often aren’t sustainable in low-density areas.

“Environmental justice is about equalizing access to clean and healthy air and water.” —Abdul El-Sayed

The city’s health department relies on a variety of strategies and programs to try to combat such social determinants of health and focuses on innovative solutions to health issues that affect multiple generations living in poor neighborhoods.

Take air quality, which hits Detroit hard. An “asthma capital,” where more than 12 percent of kids suffer from the chronic lung disease, Detroit is hoping to team up with a tech company to track air quality in real time with a crowdsourced app that would allow users to take an air quality reading, stamp it with a time and location, and upload it so that others can judge when it’s safe to be outdoors.

“Environmental justice is about equalizing access to clean and healthy air and water,” El-Sayed says. “Unfortunately, we know that poverty is a big predictor of who gets access to clean environments. Our goal is to mitigate the effects of these unhealthy environments by arming our families with children with asthma with real-time information about air quality so that they can protect themselves and their kids.”

Other programs already up and running are showing promising results: Lead poisoning, often traced to contaminated water or paint, has dropped in children under 6 years old by 50 percent over the past six years as city abatements and demolitions aimed to reduce exposure and collaborations with nonprofit projects such as the Green & Healthy Homes Initiative and CLEARCorps/Detroit worked to create greater awareness.

“The greatest risk factor for lead poisoning is living in a house built before 1978 that has not been abated,” El-Sayed says. “Unfortunately, our lower-income families are most likely to reside in these houses. Testing allows us, hopefully, to catch the challenge early and address it. This is critically important because adults who are poisoned as children are more likely to drop out of high school, to have been incarcerated and to earn less than their healthy counterparts.”

While it’s important to note that improvements are associations and that it’s nearly impossible to say what particular program or combination of programs should be credited for the success, it’s enough for El-Sayed to believe that there will be a day when a baby born in Detroit has the same chance of living to 100 as a baby born anywhere else.

“For me, the image I have in my mind is a small child who has the same chance of making dreams come true as a kid out in the suburbs,” he says.

When reporters call Baylor College’s Hotez to talk about Zika, he often offers to drive them through the Fifth Ward of Houston, where he says a battle needs to be waged against the virus. Urban poverty, he says, is a huge risk factor for the disease, which is linked to babies born with microcephaly, or underdeveloped brains. His tour includes a firsthand look at the area’s crowded deteriorating homes, many of which don’t have screens or proper roofs, and the old tires and bottle caps strewn across lawns, creating water reservoirs that are prime breeding grounds for the mosquito that carries Zika.

And it’s not just this particular virus: Hotez says other tropical diseases are popping up in poor pockets of wealthy countries.

In fact, Hotez calls overwhelming poverty “the single biggest predictor of disease” because of the environmental degradation that comes with it. With the difference between the poor and wealthy widening, renewing the environment of such urban areas is essential in fighting disease, he says.

The city of Houston is hoping to limit the breeding grounds of mosquitoes by enforcing a city ruling to eliminate illegal dumping in neighborhoods such as the Fifth Ward and sending inspectors to businesses that throw out scrap tires. In the meantime, the Texas Health and Human Services Commission recently announced that Medicaid will now cover the cost of mosquito repellant to try and stave off Zika.

Although Baltimore’s Wen no longer feels the weight of issuing Band-Aid medical care, she feels the injustice of health disparity by ZIP code acutely in her city.

The city health department she heads is partnering with neighborhood associations, other city agencies and nonprofits to ensure that every child has a healthy environment to grow in. Those partnerships have helped foster relationships with key influencers in neighborhoods across the city.

“We have women holding lead paint awareness parties,” she says, part of an education effort that has correlated with a drop in average blood lead levels of Baltimore children from 10 micrograms per deciliter to 5 (the Centers for Disease Control and Prevention uses a reference level of 5 micrograms per deciliter to identify kids with higher lead levels than most). “We get out the message that every child should be tested — and that resources are available for every child. Our [abatement] services are free.”

Since a healthy environment should include access to healthy foods, Wen says, the health department has partnered with a local grocer to create an online supermarket, staffed with volunteers at libraries and senior centers to help residents order fresh fruits and vegetables that are then delivered for free. The department has also worked with local corner stores to stock healthy options, prompting about 20 businesses to add fresh fruits, vegetables and whole-grain snacks.

The World Health Organization has a goal of closing the health gap created by social determinants within a generation. The U.S. government’s Healthy People 2020 program has specific goals to reduce the gap by 2020, including improving air quality, reducing lead levels in kids, reducing environmental hazards and improving access to healthy foods.

The examples presented here showcase some of what’s happening in cities and public health departments around the U.S. to reduce location-linked health disparities. If the larger goals set by WHO and the U.S. government are to be met, cities everywhere would do well to identify and adopt similar practices aimed at eliminating the link between ZIP code and health.

Sheila Mulrooney Eldred writes about health and fitness for a variety of publications. Her work has appeared in The New York Times, Outside.com, Discovery News, Pacific Standard and Runner’s World, among others. She's a graduate of Columbia's School of Journalism and a former newspaper reporter. She lives in Minneapolis with her husband and two kids.