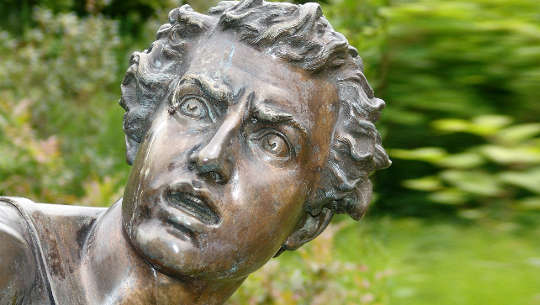 The emotional charge of fear is a huge one. It is the emotion I come across more than any other in my work with cancer clients.

The first instinctive physical reaction to fear is for people to hold their breath. The first energetic reaction is a reduction in the charge of the first chakra, because of experiencing a physical threat. Simultaneously the entire aura contracts and becomes denser. Both result in a sudden reduction of energetic flow and circulation.

When sitting opposite a client during our chat prior to an actual healing, I notice these physical and energetic reactions time and time again. Most of the time, I make clients aware of my observations, not in order to tell them off or humiliate them but in order for the clients themselves to gain more self-awareness.

Also, fear creates the tendency in people to try and escape from reality, to try and escape from the here-and-now. As soon as the first flicker of a wish to escape crosses our mind, without realizing, the first chakra instantly reduces its connection to the here-and-now, to planet Earth. We “pull up the drawbridge”, the root chakra, which governs kidneys and adrenal glands. That is why these organs are associated with and affected by fear. Long-term exposure to fearful situations may be detrimental to the functioning of those organs.

Adrenal fatigue, for example, is nothing but a physicalized fearful state of being. It often relates to an indirect fear, one that doesn’t necessarily threaten the person’s life directly but is more an underlying fear arising from abuse, violence, poverty, abandonment, and other factors that lasts years or decades. It is based upon previous experiences and is subconsciously tucked away somewhere in the body for it to fester.

Besides absorbing the vital life energy of these areas of the body and organs, the root chakra is responsible for keeping an individual’s overall immune system in good health.

It’s important to realize the implications. If a person lives in a prolonged state of fear and wishes to be elsewhere, his overall capacity to live is reduced, possibly to the point of annihilation. Interesting or what?

As I pointed out, it’s as if the person pulls up the drawbridge energetically and the root chakra reduces in size and vitality. Knowing that that same first chakra regulates the overall immune system, it becomes of paramount importance to reduce fear as much as possible during a client’s daily life.

In this respect it is very unhelpful (to use an understatement) for the medical profession to present a patient with a worst-case scenario when informing them of a diagnosis and a prognosis.

In Luciana’s case, I noticed that she was bombarded by fear and devastation and rarely managed to relax her ever-active mind. Her mental tension showed strongly in the third mental level of her aura.

And Ronald had little faith in life, especially his own, which he considered undeserved. This contracts a person’s aura and chakra system as well as DNA strands and leaves them wide open to all manner of daily negative influences. The impact of these is even stronger when the energetic buffer zone (the aura) has lost much of its fluid expansiveness, its coping mechanism.

This type of impact is not conducive to anybody’s health. Whether an aura functions optimally or not can make the difference between one person contracting a serious illness and another person avoiding it. Someone with a (serious) disease or who is recovering from one can not afford energetic depletion. Physical as well as energetic bodies need every ounce of energy available to them during the stages of illness and recovery.

The Fear of Dying Young...

Another source of fear is that of dying young, before a full and fulfilling life has been lived, and/or that of attracting some life threatening illness. Pauline's mother had suffered for two years with progressive ovarian cancer and had been bedridden, before death put an end to two years of agony. Pauline had nursed her mother through this period and had been strongly affected by watching her mother grow weaker.

The gruesome images kept haunting her daughter, and she began to develop the belief system that she was also fated to succumb to the same illness. Sure enough, a couple of decades later she developed ovarian cancer.

Had Pauline grieved sufficiently? Had she managed to put her mother and her two-year-long dying process at rest, devastatingly painful as it had been to witness for the devoted daughter? During these years, to what degree had Pauline over-identified with her mother? To what degree had she intended to carry some, if not all, of her mother’s burdens, pain, suffering, or even some of the cancer itself to try and relieve her of some of her agony?

Most likely, Pauline’s overidentification with her mother’s fate had been instrumental in creating her debilitating belief system, which had fed cancerous cells energetically in a self-fulfilling prophecy. Her mindset of doom-and-gloom reduced the energetic flow in both aura and chakras and created a feeding ground for cancerous cells to multiply and spread.

Fear Instilled by the Medical Profession

Frequently, people lean towards an attitude of apathy in relation to cancer prevention and cure. They feel at the mercy of those in power, that is, medical and state authorities, and accept their diagnosis, prognosis, and future treatment plan as gospel.

The medical profession is responsible for instilling a lot of fear in patients with cancer. When you are the one receiving the report, diagnosis, and prognosis, no longer is the professional speaking about somebody else, in some faraway country, distant county or city, the next street, or neighbouring house; instead, it concerns the person living underneath your own roof, the person sleeping in your own bed, the person living inside your own skin: you. It is often a shocking revelation.

In Luciana’s case, during the course of our work together, on one occasion a consultation with her oncologist undermined our progress temporarily and instilled a great deal of fear in her. The oncologist had been cautious regarding the scan results, and his caution undermined Luciana’s already fragile sense of trust and made fear flare up. After that, every time she was due for a scan she became nervous, and whenever the results were due she was scared.

Richard states: “Before that they gave me an 80–85 percent chance of recovery. That diagnosis gave me only a 20–25 percent chance of survival. Up to that point I’d taken cancer lightly. But I looked death in the eye directly, with most likely having to leave everything I loved behind.”

And one last extreme example offers still further proof of the impact of fear on the body. The woman whose picture I painted in Chapter 14 “Julia’s Story” was threatened and robbed and died days afterwards due to “. . . an abnormally aggressive spread of cancerous cells all over her body”.

How can science explain this, other than it being an existential trauma causing her entire body to be riddled with aggressively active cancer cells within days? Proof, especially after an official medical autopsy, that disturbed emotions and cancer are strongly related.

Energetic Cellular Healing and Cancer: Treating the Emotional Imbalances at the Root of Disease
by Tjitze de Jong

As a complementary energy healer, Tjitze de Jong has supported hundreds of clients during their journey with cancer over the past 15 years. In Energetic Cellular Healing and Cancer, he provides insight into the functioning of our cells and our immune system and how energetic distortions in our physical as well as energetic bodies, for example, in our chakras and auras, can lead to illness. He explores the correlation between cancer and emotional imbalances and explains how energetic healing techniques can make a difference in how our bodies cope with, and heal, illness.

Drawing on the work of Wilhelm Reich and Barbara Brennan, the author unravels the psychological aspects of an individual’s energetic defense system and examines where possible energetic blocks might develop or have their origin, and how they can be dissolved. He also details energetic exercises that instantly stimulate the vibrancy of the aura and the chakras and offers practical advice on how to enhance and strengthen the immune system.

Tjitze de Jong is a teacher, complementary therapist, and energy healer (Brennan Healing Science) specializing in cancer, with more than 20 years’ experience in his field. In 2007, he founded Tjitze’s Energetic Cellular Healing School (TECHS), sharing healing skills with practitioners around the world. The author of Cancer, A Healer’s Perspective, he is based within the spiritual community of Findhorn, Scotland. Joanna’s Story: From Breast Cancer to Healing and Alignment (Video) Cancer Can Be Cured: On The Road Towards Self-Determination

by Tjitze de Jong
Pioneers of all types are often met with disbelief, ridicule, harsh judgements, and lack of…