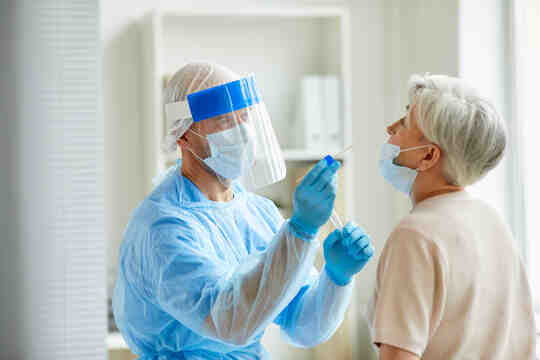 There are a few reasons an RT-PCR test can result in a false positive. Shutterstock

They’re no longer included in Victoria’s official case counts, while a number of exposure sites linked to these cases have been removed.

The main and “gold standard” test for detecting SARS-CoV-2, the virus that causes COVID-19, is the reverse transcriptase polymerase chain reaction (RT-PCR) test.

But even though the test is highly specific, that still leaves a small chance someone who does not have the infection returns a positive test result. This is what’s meant by a “false positive”.

First off, how does the RT-PCR test work?

Although in the age of COVID most people have heard of the PCR test, how it works is understandably a bit of a mystery.

In short, after a swab has been taken from the nose and throat, chemicals are used to extract the RNA (ribunocleic acid, a type of genetic material) from the sample. This comprises a person’s usual RNA and RNA from the SARS-CoV-2 virus, if present.

This RNA is then converted to deoxyribonucleic acid (DNA) — this is what the “reverse transcriptase” bit means. To detect the virus, the tiny segments of the DNA are amplified. With the help of some special fluorescent dye, a sample is identified to be positive or negative based on the brightness of the fluorescence after 35 or more cycles of amplification.

The main reasons for false positive results are laboratory error and off-target reaction (that is, the test cross-reacting with something that’s not SARS-CoV-2).

Laboratory errors include clerical error, testing the wrong sample, cross-contamination from someone else’s positive sample, or problems with the reagents used (such as chemicals, enzymes and dyes). Someone who has had COVID-19 and recovered might also show a false positive result.

How common are false positive results?

To understand how often false positives occur, we look at the false positive rate: the proportion of people tested who do not have the infection but return a positive test.

The authors of a recent preprint (a paper which hasn’t yet been peer-reviewed, or independently verified by other researchers) undertook a review of the evidence on false positive rates for the RT-PCR test used to detect SARS-CoV-2.

The false positive rates in the systematic review were mainly based on quality assurance testing in laboratories. It’s likely that in real world situations, accuracy is poorer than in the laboratory studies.

No test is perfect

For every 100,000 people who test negative and truly don’t have the infection, we would expect to have 4,000 false positives. The problem is that for most of these we never know about them. The person who tested positive is asked to quarantine, and everyone assumes they had asymptomatic disease.

Because of the nature of Victoria’s current outbreak, authorities are likely being extra vigilant with test results, potentially making it more likely for false positives to be picked up. The Victorian government said:

Following analysis by an expert review panel, and retesting through the Victorian Infectious Diseases Reference Laboratory, two cases linked to this outbreak have been declared false positives.

Either way, it is unlucky to have two false positives. But given the large numbers of people being tested every day in Victoria at present, and the fact we know false positives will occur, it is not unexpected.

For an individual who received a false positive test result, they would be forced to go into quarantine when there was no need. Being told you have a potentially lethal disease is very stressful, especially for elderly people or those at risk because of other health conditions. They would also likely be worried about infecting other members of their family, and could lose work while in quarantine.

Particularly given authorities initially pointed to these two cases as examples of transmission of the virus through “fleeting” contact, no doubt many people have wondered whether without these cases, Victoria might not be in lockdown. This is just conjecture and we can’t really know one way or the other.

False negative results are clearly very concerning, as we don’t want infectious people wandering around the community. But false positives can also be problematic. by Sarah Varcas
August begins in the middle of an eclipse season which continues until the 15th. Last month was an…

by Eileen Workman
What makes a good relationship? A willingness to surrender one’s heart—totally and without…

by Joyce Vissell
I grew up in Buffalo, New York and, from the time I was just a little girl, my parents, without…