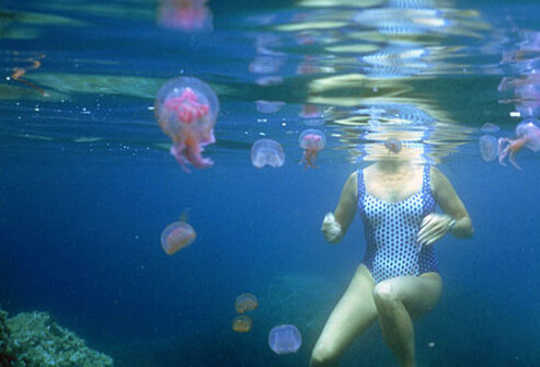 It’s easy to be confused about how to treat a jellyfish sting. Is it best to use grandfather’s slurry of bicarbonate of soda or a douse of vinegar? Is it best to use an ice pack, take a hot shower or ask someone to urinate on your leg?

Even experts disagree about the right first aid. And guidelines about how to treat the stings can seem confusing because of different types of jellyfish in different parts of Australia.

For instance, first aid differs between temperate and tropical waters (north and south of Bundaberg in Queensland), as highlighted earlier this week.

But we do not only need to consider the type of jellyfish and where in Australia people are stung. We also need to consider if a treatment works (is effective), is safe and ultimately whether it is practical.

Hot water (but not too hot) for bluebottle stings

Treating bluebottle (Physalia) stings is a good example of the balance of effectiveness, safety and practicality.

Bluebottle stings occur throughout Australia, more commonly on exposed beaches after onshore winds. They are responsible for thousands of stings each year in the warmer months. They cause immediate intense local pain lasting for an hour, or more in severe cases. At the sting site there is a characteristic raised red line that remains for hours to days.

There is good evidence immersing someone in hot water works when treating bluebottle stings. Hot water inactivates the jellyfish toxins and so stops the pain; it is effective in about 90% of cases after 20 minutes.

But there is less evidence hot water treatment is safe as there is a risk that if the water is hotter than 46°C it can burn. It might also not be practical to immerse someone in hot water on a beach.

So what happens in the real world? Surf life-savers might put victims in a hot shower. This is because the risk of a burn is low (if they test the water first), it is practical and still likely to be effective.

If your child is stung and you are close to home, head home, run a hot bath (test your child can tolerate the temperature) and get your child to soak for about 20 minutes.

Advice changes as we head north

Things become more confusing as you go north. Here, beach goers face major box jellyfish (Chironex fleckeri) stings, which can be life-threatening, and Irukandji syndrome, which can cause such severe pain you need to be treated in hospital.

For these, is it best to use vinegar or hot water? Again it’s mainly a question of safety.

A study published earlier this week found that for treating box jellyfish, immersion in hot water is no more effective than using an ice pack.

So how should we interpret this? Currently the recommendations in hospitals are to use ice packs to relieve the pain of box jellyfish stings. This seems to be as effective as immersing in hot water in the recent study, and certainly easier to do and safer. So, we should continue to use ice packs in the emergency department.

What about for major box jellyfish stings on the beach in Darwin, or Far North Queensland? This is more difficult to answer.

In animal studies hot water inactivates its venom. So it is likely that hot water will be effective if administered early. So, on the face of it, it might be reasonable to put people in a hot shower.

But, if you are stung by a box jellyfish in tropical waters, the initial priority is not to treat the pain but to prevent severe envenomation, a process that’s not clearly understood but can lead to cardiac arrest and death.

So, the current recommendation is to use vinegar, which we’ll come back to, and an immediate transfer to hospital. If the person stops breathing or has a cardiac arrest, they need immediate, basic life support.

This brings us to the question of whether to use vinegar to treat box jellyfish in tropical waters.

Vinegar has been recommended for decades to treat box jellyfish stings based on a single study. The idea is vinegar prevents the further firing of stinging cells. But there’s little evidence to suggest applying vinegar has improved victims’ health or likelihood of dying from a sting.

Then, there’s conflicting evidence about whether vinegar is harmful. A laboratory study found vinegar may actually increase the release of venom.

Clearly we need further evidence to see if vinegar is effective and harmful in a real-life situation.

But with no real-world evidence of harm in treating box jellyfish stings, and the potential benefits in preventing life-threatening envenoming, it should remain the initial first aid for these stings.

We just assume if the venom is inactivated it will decrease the severity of the sting.

Jury’s out on vinegar for Irukandji syndrome

Next comes first aid for Irukandji syndrome, caused by being stung by a range of jellyfish including Carukia barnesii. These jellyfish are found mainly in tropical waters in the north. Although some species occur in southern waters, these rarely sting.

Treating Irukandji syndrome is more difficult because in most cases people do not recognise they’ve been stung until about 30 minutes later. The pain is severe and generalised (chest, back and abdomen), needing treatment with strong opioid painkillers. A small proportion of people may develop heart problems.

Using vinegar to treat Irukandji syndrome is again controversial. The evidence may weigh more toward it causing harm, with little evidence of benefit. There is no evidence for using hot water.

No evidence for urine or bicarbonate of soda

Then there’s the old myth of using urine to treat jellyfish stings, popularised in the TV series Friends.

The TV show Friends helped spread the myth about urinating on a jellyfish sting.

There’s no evidence to back that, or for using a slurry of bicarbonate of soda.

Current guidelines might appear confusing, but are based on the best available evidence. In some cases this evidence is a randomised-controlled trial, where victims are chosen at random to receive a treatment and compared with others who receive another treatment (or no treatment). But in other cases, guidelines are based on anecdote and expert opinion, which require challenging.

We also need more research, for instance on the effectiveness and safety of vinegar, both for Chironex fleckeri stings and Irukandji syndrome.

Becoming Open To New Possibilities: A Special Bond With A Dog

Tinnitus and Vertigo: Disorders of the Ear That Are Diverse and Yet Connected

by Anton Stucki
The complex process of hearing is connected to symmetry and balance. Let us consider 2 special…

by Marianne Williamson
None of us will ever forget where we were on 9/11, or how we learned about the attacks on our…