This Tool Predicts If Prostate Cancer Will Return After Surgery 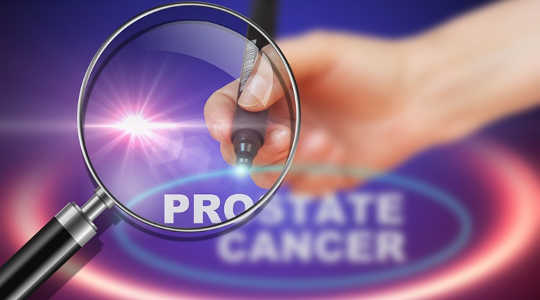 A tool that analyzes the expression patterns of four genes might help doctors predict if prostate cancer will reoccur following surgery.

Currently the only other way to estimate tumor aggressiveness is with a Gleason score, a grading system for prostate tumors that has limited power in most cases, researchers say.

Some prostate cancers grow very slowly, and when the disease is detected early the five-year survival rates are nearly 100 percent. However, some men are diagnosed with more aggressive localized disease and even after having a radical prostatectomy to remove the entire prostate gland, cancer will return in one-third of patients.

“Our study sought to improve upon the prediction tools used in these types of cases so that oncologists would know with more certainty when to recommend additional treatment, such as radiotherapy, immediately after surgery,” says Hucky Land, director of research at the University of Rochester’s Wilmot Cancer Institute, who led the research.

Earlier, Land’s lab discovered a large group of non-mutated genes that are actively involved in cancer development. After analyzing expression of this gene set in frozen prostate cancer tissue samples, researchers discovered the four-gene signature, which was expressed differently in prostate cancer that later returned.

Justin Komisarof, an MD/PhD student in the Land lab, developed the various algorithms and methods to evaluate the gene signature. The research team concluded that their tool outperformed other scientific methods, and they have applied for a US patent. The Best Option For Cancer Fatigue Isn’t A Pill by Leslie Orr, University of Rochester
Women with breast cancer cite “chemo-brain” as a substantial problem after chemotherapy for as long… Why Some People's Fat Has Nothing To Do With Food

by Leslie Orr, University of Rochester
“Our goal is to prevent or reduce obesity and in this paper we’ve shown how to do this in… by Alan Seale
There is a universal saying, “The answers are within.” Often, this saying is interpreted to mean…

by Jude Bijou
It’s not just intimate partnerships that are destroyed by not being able to resolve conflict.…