Can You Sneeze Without Closing Your Eyes? 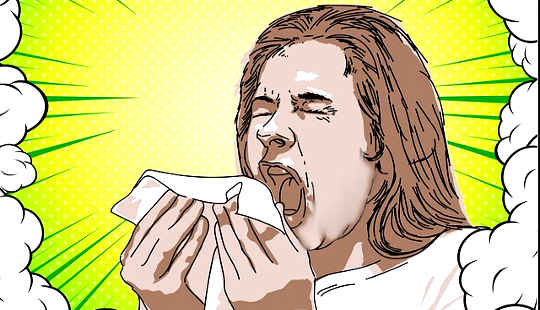 Is it possible to sneeze without closing your eyes?

It is “absolutely possible,” but most people tend to automatically close their eyes when sneezing, according to David Huston, associate dean of the Texas A&M College of Medicine Houston campus and an allergist at Houston Methodist Hospital.

Closing the eyes is an autonomic reflex, an unconscious motor action in response to a stimulus: in this case, sneezing.

“The fact that it is possible to sneeze with the eyes open suggests that it is not hard-wired or mandatory,” Huston says. There is not definitive data as to why sneezing elicits a blinking response, but Huston and others speculate that it is reflective of a protective mechanism.

“The body works to rid its airways by sneezing when it detects irritating particles in the nose,” Huston says. “By automatically shutting the eyelids when a sneeze occurs, more irritants can potentially be prevented from entering and aggravating the eyes.”

You might recall the age-old myth that warned against sneezing with open eyes to mitigate the possibility of eyeballs popping out. Tales swirled for decades speculating that subluxation, or dislocation of the eyeball, could occur if people sneezed with their eyes open. Many point to a story published on April 30, 1882, in the New York Times that reports an incident of a woman whose eyeball became unhinged from aggressively sneezing.

The article told of a woman who “met with a singular accident day before yesterday. While riding on a street car, she was seized with a sudden fit of sneezing and burst one of her eyeballs, from which she has since been suffering the most intense pain.”

However, the rumors that open-eye sneezes dislocate eyeballs were based on conjuncture. In fact, Huston dubbed such stories as “far-fetched tales.” “There is little to no evidence to substantiate such claims,” he says. “Pressure released from a sneeze is extremely unlikely to cause an eyeball to pop out even if your eyes are open.”

Increased pressure from straining builds up in the blood vessels, not the eyes or muscles surrounding the eyes. This vascular pressure can result in ruptured capillaries, which are the body’s smallest blood vessels, which often manifest in the eyeballs or the face.

“For example, during childbirth, excessive straining can cause some veins to hemorrhage, leaving a mother’s eyes or face to appear red or markedly bruised,” Huston says, “but it is irresponsible to claim that such pressure could dislodge the eye from its socket.”

With cold and flu season in full force, there are a number of methods to protect others from the germs spewed when sneezing. “Although you can focus to keep your eyes open when sneezing, your body’s blinking response is likely there to protect itself from germs,” Huston says. by Texas A&M University
A vasectomy, or male sterilization, is a very effective, relatively simple option for permanent… by Eileen Day McKusick
Purplewashing is a term I have coined to describe the tendency people have to gloss over, repress,…

by Marie T. Russell
The pattern I have seen repeated both in myself and in others around me is what we could call the…

by Robert Jennings, InnerSelf.com
Can the future be predicted? Most certainly. Can anyone or anything predict the future with any…