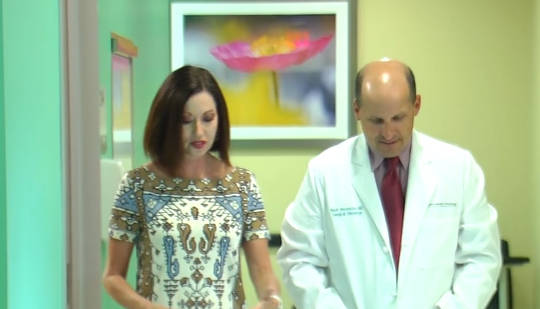 Reovirus, a common virus that causes mild cases of respiratory infection, mainly in children, could be harnessed as an immunotherapy to fight primary liver cancer and hepatitis C.

Viruses cause around 20% of all human cancer. While only a handful are known to be tumour-promoting, this is a particular problem for liver cancer, where around three-quarters of cases are caused by either hepatitis C virus (HCV) or hepatitis B virus (HBV). These cause long-lived infections within the liver that in some people eventually give rise to tumours. But in our latest study, we show that our immune systems can be coerced into targeting both the tumour and the underlying HCV infection that is driving it to grow.

We persuaded the immune system to target both the tumour and the underlying HCV infection by administering a benign virus – reovirus – as an immunotherapy. Mice with liver cancer caused by hepatitis C responded well to this therapy. The therapy could also be extended to other virus-driven malignancies, including Epstein Barr virus blood cancers.

Liver cancer is the third highest cause of cancer-associated death worldwide, killing about 745,000 people in 2012, despite being only around the tenth most common cancer. This reflects the difficulty in treating this tumour at advanced stages, where it has progressed too far to be removed by surgery. In around 90% of cases where surgery is not an option, most other forms of treatment tend to prolong life, rather than cure the tumour. HCV and HBV cause about 30 and 50% of these tumours, respectively. HCV is the leading cause for liver transplant surgery in developed countries and infects around 170m people across the planet.

It is becoming clear that one of the most powerful weapons to combat cancer is our own immune response. However, as cancers essentially grow as extensions of our own bodies, we usually need to manipulate this response using immunotherapy. This approach can take several forms, including disabling immune “checkpoints”, whereby we take the brakes off immune responses. Alternatively, we can put our foot on the accelerator by using strategies that hyper-stimulate immunity, allowing it to recognise and respond to targets that may otherwise be ignored.

One such strategy is to use viruses themselves, but only those that don’t cause human disease. These cancer-killing or “oncolytic” viruses are increasingly used in clinical trials. One example was recently licensed as a medicine for the treatment of skin cancer.

Our study focused on a particular oncolytic virus, reovirus, as we knew that it could reach tumours within the liver following injection into the bloodstream. Reovirus is a very safe agent to use in cancer patients. Importantly, it safely pressed the immune accelerator pedal throughout the liver, as well as within cancers. This was important, as the underlying HCV infection affects the whole organ, not just the tumour.

The lynchpin of this accelerator response was a substance called interferon, which is released by the body when mounting aggressive responses to both infections and cancers alike. Using both primary human liver tissue and mice, we were able to show that the reovirus-stimulated interferon acted in two ways: first, it directly eliminated HCV within liver or tumour cells, and second, it hyper-activated specific immune cells known as natural killer cells, causing them to kill both virus-infected and cancerous cells.

The outcome of reovirus therapy was the simultaneous elimination of HCV as well as the direct destruction of liver cancer cells, culminating in reduced tumour growth within mouse models of this devastating human disease. The same approach also worked in models of HBV liver cancers and Epstein Barr virus blood cancers.

As reovirus is already available in a clinically usable form, our next step is to secure support for early clinical trials assessing how this therapy might act alongside current liver cancer drugs. In the future, we envisage that this or similar strategies might be useful for treating multiple tumours caused by virus infection. Effectively, by pitting curative against causative viruses, we hope to improve outcomes for cancer patients in the future.