Diabetes Treatment Could Be Revolutionized By Making People Cold 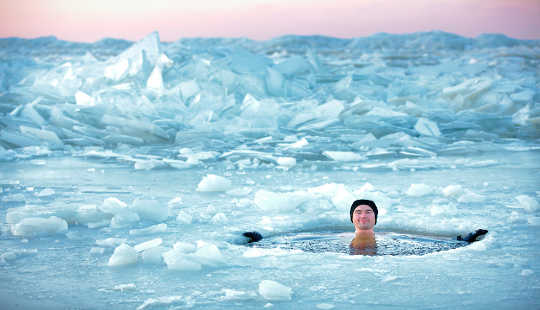 For people in northern countries enjoying summer sun, I hate to put a dampener on things but winter’s coming. The cold months can seem to go on forever, yet scientists are uncovering a new reason to be grateful for them.

It turns out that cold climates may help keep type 2 diabetes at bay because of surprising findings about how temperatures affect certain “good” fats in the body. This insight potentially opens up exciting new means of treating people with diabetes – which afflicts 415m people worldwide and is predicted to increase to 641m by 2040.

Strangely enough, this possibility arose from scientists trying to develop something else, namely a new major way of treating obesity. The two endeavours are linked in ways we don’t yet fully understand. To get a sense of how, you need to understand a bit about fat.

Our bodies have three types of fat: white, brown and brite. White fat cells are the body’s energy stores, comprising about a fifth of the weight of the average man and about a quarter of the average woman. Obesity is an excessive storage of this fat, and this increases the risks of type 2 diabetes. Almost 90% of people with type 2 diabetes are overweight or obese.

Brown fat cells operate very differently. They are packed with mitochondria, which are rod-shaped organelles that are present in all cells. Mitochondria are often called the power houses of the cell for the way they convert nutrients in our food into a fuel source known as ATP that powers all cellular functions. Unusually, however, brown fat cells contain a special protein that when activated, restricts this conversion so that the energy is released as heat instead.

You find a lot of brown fat in small mammals like mice and rats that need lots of heat to regulate their body temperature. Human babies have it, too, but for a long time it was thought to disappear in adults, who can usually keep sufficiently warm through metabolic processes. In 2007, however, it was shown that adult humans do have functional deposits of these cells. This discovery is part of the reason for the recent excitement among obesity scientists.

Brite (BRown in whITE) fat cells only came on the radar 25 to 30 years ago. Several groups observed that when small mammals are placed in the cold, their white fat deposits take on a browner appearance – a process we now call “browning”. Much more recently we realised that these cells – also known as beige – come from a separate lineage to white fat even though they are related.

When brite cells mature they can act like either white or brown cells as the body’s needs change between energy storage and heat production. Scientists have been trying to understand this process, believing that if we can switch these cells into their brown phase, we may be able to activate them along with the body’s brown fat to burn off the energy stored in true white fat cells. Exposure to cold could be the key, since research has previously shown that this activates brown and brite fat in both small mammals and humans.

But will it work? A paper I recently co-authored sought to investigate this by analysing public health data. Our rationale was that if you can burn off excess white fat by increasing the sum of brown/brite fat in the body; and activate this through exposure to cold, people will on average be thinner in colder climates.

America under the microscope

Ours was not a completely new idea, but previous attempts were confounded by trying to compare different countries. Instead we focused on just one country – the US, which has one of the highest obesity rates in the world.

We recovered data on levels of obesity, type 2 diabetes, poverty, race and temperature from 2,654 of America’s 3,146 mainland counties, covering around 170m people. We found a weak correlation between the ambient temperature and obesity prevalence.

Unexpectedly, though, the effect of climate on type 2 diabetes was much stronger. In the same two types of cooler and warmer counties, the prevalence of the illness was 1.6 times higher in the warmer ones (12.1% prevalence compared to 7.6% in the cooler counties). 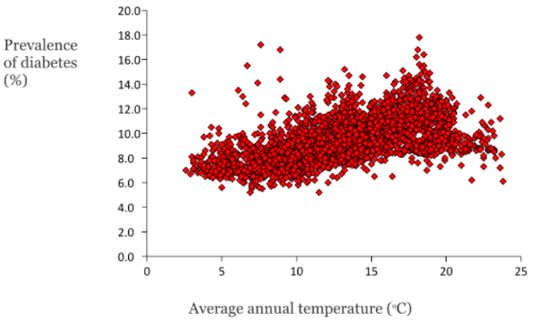 John SpeakmanIt is not quite that simple, however. Warmer counties have higher populations of African Americans and are poorer, both of which are also linked to higher prevalence of obesity and type 2 diabetes. When we factored this into the data analysis, it completely accounted for the disparity in relation to obesity. With type 2 diabetes, the temperature effect was reduced but still remained very strong.

The message seems clear: switching on your brown and brite fat may not do very much for your obesity levels, but it may have a strong impact on type 2 diabetes.

Despite our best efforts to control for confounding factors, it is always possible the data is being affected by something we overlooked. We were delighted therefore that while our paper was in review a small clinical trial was published in the Nature Medicine journal which showed enormous beneficial effects on insulin action from exposing type 2 diabetic patients to cold temperatures (15℃) for six hours per day.

The interesting thing was these benefits occurred despite only small changes in the patients' brown and brite tissues. This suggests there is something special about being exposed to cold that may affect type 2 diabetes risk that we don’t yet fully understand.

So while this analysis suggests that the hopes of being able to treat obesity by switching on brown and brite fat tissue may turn out to be disappointing, something else exciting appears to be emerging instead. Patients with type 2 diabetes may see a major new additional avenue in treatment in the years ahead.

The Benefits of Lavender: Growing, Harvesting and Using This Medicinal Plant

by Michelle Schoffro Cook, PhD, DNM, ROHP
It’s easier than you think to experience the beauty and healing properties of lavender by growing…

Revolution Within and Without: Claiming Our Power to Take a Stand

by Sarah Varcas
At a planetary level Eris conjunct Uranus will shake things up like never before. Revolution is in…