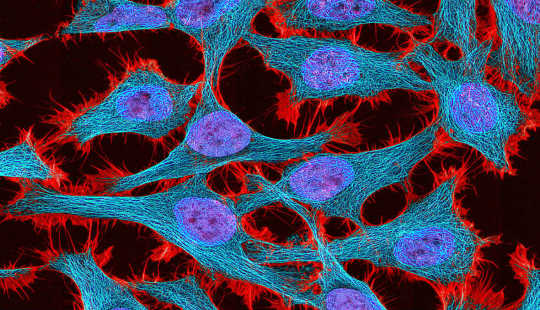 "The idea that increased glucose uptake is a metabolic hallmark of cancer cells is deeply embedded in our thinking. It's the basis for how we diagnose cancer and manage its treatment in the clinic," says Gary Patti. Above: HeLa cells in culture. (Credit: National Institutes of Health)

Cancer cells are defined by their ability for uncontrolled growth, one cell quickly becoming two, and two becoming many.

“It’s a fascinating process,” says Gary Patti, associate professor of chemistry at Washington University in St. Louis. “Imagine creating two copies of yourself every few days, instead of just maintaining the one you have. In the past 15 or 20 years, people have become really interested in how a cell does that.”

For more than 80 years, the reigning idea has been that cancer cells fuel their explosive growth by soaking up glucose from the blood, using its energy and atoms to crank out duplicate sets of cellular components. One of the reasons so much glucose is taken up is to make the lipids, or fats, that are assembled into cell membranes, the thin veils that separate the contents of a cell from its environment.

In 1970s and ’80s, scientists working with radioactively tagged glucose showed that practically all the lipids inside tumor cells were made from glucose the cells took up from the extracellular environment, a finding that seemingly corroborated the “glucose hypothesis.”

The hypothesis makes sense, but like many other things that make sense, it may not be right.

While pursuing other work, Patti discovered that proliferating fibroblasts make most of their lipids from glucose only if they are grown in standard cell-culture medium, which is nutrient-rich but lipid-poor.

When scientists spiked the culture medium with lipids, raising concentrations to those typical of blood, the cells preferred to scavenge lipids from the medium rather than synthesizing them. And under these conditions, rapidly dividing cells took up no more glucose than cells that weren’t dividing.

The effect was discovered in cultures of fibroblasts, which divide until they touch one another and then stop, giving scientists a chance to compare the metabolism of proliferating and quiescent cells.

But intrigued by the “lipid effect,” scientists checked for it in two cancer-cell lines, the famous HeLa cells, and a lung cancer cell line called H460. These cell lines responded less strongly but similarly to lipid concentrations.

The startling result, reported in the journal Cell Chemical Biology, calls into question aspects of cancer research and treatment founded on the glucose hypothesis.

“It has only been possible to think about glucose metabolism at the systems level for the past few years,” Patti says, referring to the new discipline of metabolomics. “Before that, the technology to follow glucose through all the possible metabolic pathways just didn’t exist.

“The idea that increased glucose uptake is a metabolic hallmark of cancer cells is deeply embedded in our thinking. It’s the basis for how we diagnose cancer and manage its treatment in the clinic.”

In diagnostic FDG-PET scans, patients are injected with a small amount of a glucose analog that includes a radioactive atom, and are then scanned to create images of glucose uptake by various organs. Bright spots on these images indicate potential cancer.

Flying under the radar

“Our study raises questions about the sensitivity of these scans,” Patti says. “Perhaps cancer cells can live off fats floating in the blood rather than making them all out of glucose, particularly in the case of obese or diabetic patients whose blood lipid concentrations can be higher than normal.”

Could this allow cancer cells to fly under the radar, leading to false negatives?

Because of the glucose hypothesis, scientists have devoted a lot of attention to developing cancer therapies that inhibit either glucose metabolism or lipid synthesis. But if the assumption is wrong, would blocking glucose metabolism slow cell growth? Wouldn’t the cells just scavenge lipids from their surroundings?

To test this possibility, the scientists tried dosing their cell lines with 2DG, a glucose molecule with a hydrogen atom substituted for a hydroxyl (OH–) group that gets stuck in the pathway that breaks down glucose. They found that if they spiked the cultures with lipids as well, 2DG was much less effective in slowing the growth of cancer cells.

“This finding challenges the reasoning behind one strategy for killing cancer cells,” Patti says. 2DG is now in clinical trials.

If the findings suggest that cancer cells might not respond as hoped to drugs that block the glucose uptake, it also suggests blocking lipid uptake might be effective.

The scientists tested this idea by dosing their cultures with a drug called SSO that irreversibly binds to a lipid transporter in the cell membrane, inhibiting lipid uptake. When they did this, all three cells lines were slower to grow and divide.

“Perhaps we should be thinking more about inhibiting lipid uptake,” Patti says. “The last point—and I think most people accept this—is that cell cultures are highly artificial systems that often give misleading results. Whether cell culture findings translate to animal models or patients is really questionable; it’s hard to place a lot of trust in them.

“In this case, the standard cell culture media that everyone uses has such low lipid concentrations that it really skews what the cells in culture are doing. Even though we all do the same cell culture in the same way it is dangerous to assume the results apply to the clinic.”