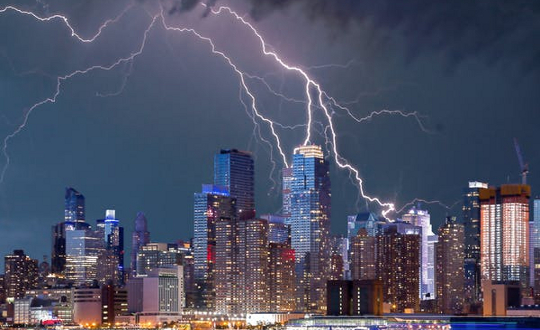 The Met Office has issued several “yellow thunderstorm warnings” for the UK, highlighting the potential for frequent lightning. While your chance of getting struck by lightning is low, it’s important to know how to stay safe during a thunderstorm. Globally, about 24,000 people each year are killed by lightning and another 240,000 are injured.

Most people are familiar with basic thunderstorm safety, such as avoiding standing under trees or near a window, and not speaking on a corded phone (mobile phones are safe). But did you know you should avoid taking a shower, a bath or washing the dishes during a thunderstorm?

To understand why, you first need to know a bit about how thunderstorms and lightning work.

Two basic elements cause a thunderstorm to thrive: moisture and rising warm air, which of course go hand in hand with summertime. The high temperatures and humidity create large amounts of moist air that rises into the atmosphere, where it can form into a thunderstorm.

Clouds contain millions of water and ice droplets and the interaction of these is what leads to lightning generation. The rising water drops collide with the falling ice drops, passing them a negative charge and leaving themselves with a positive charge. In a thunderstorm, clouds act as enormous Van de Graaff generators, separating the positive and negative charges to create massive charge separations inside the clouds.

As thunderclouds move over the Earth, they generate an opposite charge in the ground, and this is what attracts a lighting strike towards the ground. The thunderstorm wants to balance its charges, and it does this by discharging between positive and negative regions. The path of this discharge is usually the one of least resistance, so things that are more conductive (like metal) are more likely to be struck during a storm.

The most useful advice for a thunderstorm is: when thunder roars, go indoors. However, this does not mean you are completely safe from the storm. There are some activities inside that can be almost as risky as staying outside in the storm.

Unless you’re sitting in a bath outside or showering in the rain, you’re incredibly unlikely to be struck by lightning. But if lightning strikes your house, the electricity would follow the path of least resistance to the ground. Things such as metal wires or water in your pipes provide a convenient conductive path for the electricity to follow to the ground.

The shower provides both of those things (water and metal), making it an ideal path for the electricity to take. It could turn that nice relaxing shower into something much less relaxing. The US Centers for Disease Control and Prevention strongly encourage people to avoid all water-based activities during a thunderstorm – even the washing up – to reduce your risk of a strike.

There are other risks to look out for during a thunderstorm. One that may not seem obvious is leaning on a concrete wall. While concrete itself isn’t that conductive, if it has been reinforced with metal beams (called “rebar”), these can provide a conductive path for the lightning. Also avoid using anything plugged into an electrical outlet (computers, TVs, washing machines, dishwashers) as all of these can provide pathways for the lightning strike to take.

As a rule of thumb, if you can hear thunder in the distance, then you’re close enough to the storm to have lightning reach you, even if there is no rain. Lightning strikes can happen as far as ten miles away from the parent storm. Typically, half an hour after hearing that final thunderclap is a safe time to venture back into the shower. Thunderstorms usually like to save a big one for the end, and you don’t want to end up part of the fireworks!