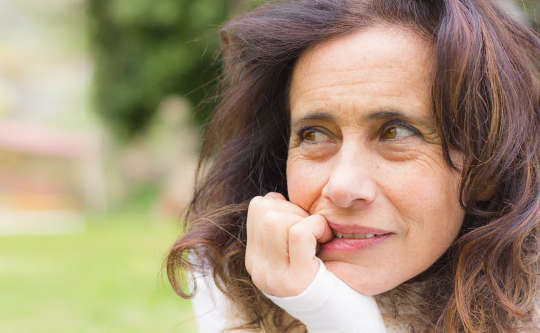 A lot is still not known about the connection between menopause and mental health. Photo from shutterstock.com

Most women expect to experience the effects of hormonal changes when they come to menopause and many anticipate increased irritability and mood swings. But mood swings that can be just an annoyance for some women can develop into something more serious for others.

Menopause usually begins around the age of 50, when the body’s production of oestrogen and progesterone slows. This can leads to a range of effects such as hot flushes, vaginal dryness, breast tenderness and trouble sleeping. These symptoms can last around five years.

Menopausal hormone fluctuations can have a significant impact on women’s mental health, with some women more vulnerable to these changes than others. These mental health problems require specific treatment and support.

Women are two to four times more likely to have an episode of major depression during menopause than at other times in their lives.

But despite anxiety symptoms and panic attacks being commonly reported during menopause, little is known about their link with menopause.

Oestrogen has a protective effect against psychotic symptoms for women, due to its modulating effect on the neurotransmitter dopamine.

Excess dopamine is one of the neurological changes seen in patients with schizophrenia, a mental illness that causes episodes of delusions and hallucinations.

Women with an existing diagnosis of schizophrenia may be at increased risk of an episode as their production of oestrogen decreases.

While the causes of schizophrenia are a complex mix of genes, your early development and stress, some women develop schizophrenia for the first time after menopause.

Eating disorders affect women across their lifespan, and often begin at the first major period of hormonal change: puberty.

But researchers are beginning to understand the hormonal changes that occur during menopause also increase the risk of developing an eating disorder, such as anorexia, bulimia and binge eating.

Once again, the increased risk is due to fluctuations in oestrogen, which plays an important role in how we regulate our food intake, affecting feelings of hunger, satiety after eating and weight gain.

Bipolar disorder is a serious mental health disorder affecting up to 2% of Australians. It causes bouts of severe depression and episodes of increased energy, known as mania.

Our research found that women with bipolar disorder may be uniquely affected by menopause in many ways. Disturbances in sleep due to hot flushes, for instance, can affect the onset of depression and mania.

Women without a history of mental illness should be aware of the risks and talk to their GP prior if they notice persistent changes in mood, or other concerning symptoms.

GPs can prescribe medication and refer to psychologists for Medicare-subsidised counselling, or to psychiatrists for more specialised care. by Saloni Sharma, MD, LAc
Sufficient sleep provides the recovery time essential to the healthy functioning of our body and… Turning Back the Clock with the Gut Microbiome

by Holly Korthas
You see it in commercials every day: creams and lotions to reduce wrinkles, dyes to eliminate gray… How a Healthy Microbiome Can Reduce the Severity of Infection

by Samuel J. White and Philippe B. Wilson
A vast combination of microorganisms live in our gut, including bacteria, fungi and viruses.… How Do You Know When Holiday Drinking Is Hurting Your Brain?

by Jamie Smolen
For many, the holidays are indeed the most wonderful time of the year. Families and friends come… Hangovers: This Is What Happens to Your Body When You’ve Had One Too Many

by Hal Sosabowski
Having a few drinks at Christmas is, for some people, as much a part of the festive tradition as…