Why Do Women's Eggs Run Out 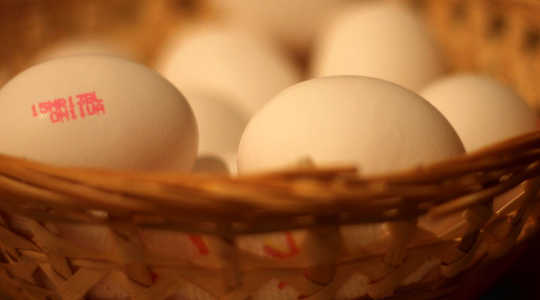 Unfortunately women only have the eggs they’re born with. Kyle Brown/Flickr, CC BY-SA

Most women will have been made aware they have a “biological clock” and that it’s ticking. Most know the older women become the harder it is for them to conceive. But most probably don’t know it’s because women are born with a limited supply of eggs, and eventually they will run out.

Eggs are made when women themselves are in the womb. By 20 weeks' gestation the tiny developing ovaries in a human fetus contain about five million eggs (the technical names for which are gametes, oogonia or oocytes). This is the maximum number of eggs a female will ever have, because new ones stop being made after this time.

For reasons that are still unclear, more than two-thirds of these newly made eggs degenerate in the following months, leaving a much smaller supply of eggs at birth. Egg numbers at birth range anywhere from half to one million.

The eggs present at birth constitute the only supply of eggs a woman will have in her lifetime. This stockpile of eggs, which is called the ovarian reserve, is housed in structures called primordial follicles.

Although quite a few follicles (30-40) start to develop in waves before each ovulation, usually only one follicle makes it to ovulation to release an egg. The rest degenerate over the six-to-eight-week development phase. So a woman actually ovulates only about 400 eggs during her reproductive life. This is about 1% of the pool of follicles ever produced.

By the age of 30, women will have on average only 12% of the number of eggs they had at birth. This number is still sufficient to support fertility for the next few years, provided the ovary is not subjected to external influences such as cancer drugs or serious ovarian surgery.

But what about IVF?

IVF can lead to pregnancy, but only if the eggs are healthy. IVF cannot make an unhealthy egg healthy again, given our current state of knowledge and techniques.

The chances of establishing a pregnancy with the assistance of IVF as women age is well documented. It can be 30-45% in women under 38 and has been shown to decline to less than 10% after 42 years of age.

What about freezing eggs?

Egg freezing can be performed to preserve a number of mature eggs for later use. This involves a process of ten to 12 days of hormone administration to stimulate development of multiple follicles.

The number of follicles that develop depends on the age of the woman and her intrinsic fertility. The average number of eggs collected and subsequently frozen for a 35-year-old woman is about ten.

Although 90-95% of eggs make it through the thawing process, we would still expect only one to three good embryos to develop from that group of ten eggs. This is the same as fresh eggs – about 50% fertilise and then fewer develop to make good embryos.

Both the processes of embryo creation and the pregnancy potential of embryos are similar from fresh and from frozen eggs. But the “normal” loss that occurs, as the eggs are fertilised, made into embryos and then develop, means that at most the process of egg freezing will offer a small finite number of additional opportunities for a woman to conceive in the future.

A recent report shows new healthy eggs can be made from stem cells. Stem cells are present in human embryos, as embryonic stem cells, and in most organs including the ovary. Alternatively, an induced form of stem cells can be obtained by treating mature cells with a cocktail of reagents in the laboratory.

The procedures required to create new eggs out of stem cells are very complex and still experimental. There are ethical issues, such as the need to destroy a human embryo to obtain embryonic stem cells, and further experiments will be necessary to show there are no genetic or fertility problems with subsequent generations.

It will require much more research to establish the safety and efficacy of the procedures before they are allowed into clinical use.

Women do not have an unlimited supply of eggs, but it may be possible in the future to create healthy eggs from stem cells in the laboratory. Until such a time, it’s essential all women and men understand the limitations of the fertility of women and plan their lives to take full advantage of the fertile lifespan should they choose to have children.