Time For A Mammogram? Depends On Menopause Not Age 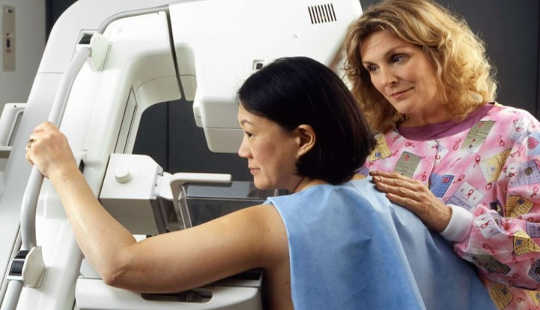 A new study helps answer questions debated for many years: How often should women be screened, will some women benefit more from a shorter screening interval, and can others safely be screened less frequently? (Credit: Nicholas Erwin/Flickr)

For postmenopausal women with an average risk of breast cancer, a mammogram once every two years is a safe option, a new study suggests.

Published online in the Journal of the American Medical Association Oncology, the research also suggests that premenopausal women older than age 40 may decide to have an annual mammogram to increase their chances of finding cancers at an earlier stage. These women, should however, weigh this potential benefit against the increased potential for false alarms, which can occur more often with more frequent screening.

The findings help answer questions debated for many years: How often should women be screened, will some women benefit more from a shorter screening interval, and can others safely be screened less frequently?

Instead, the differences found were based on the women’s menopausal status—not on their age.

Conversely, researchers found that postmenopausal women who were not using hormone therapy and were diagnosed as having breast cancer following a biennial or annual screen had similar proportions of tumors with less favorable prognostic characteristics. This was also true for women aged 50 and older.

Some women, such as those who have had their ovaries removed or are using certain types of birth control that result in not having periods, may not know their menopausal status. These women may want to base their screening decisions on their age instead. For example, the vast majority of women are postmenopausal by the time they are 55.

To move toward a more personalized approach to screening, Miglioretti says future research should work to identify other risk factors that affect the benefits or harms of screening.

The research was conducted using data from the Breast Cancer Surveillance Consortium (BCSC), the United States’s largest collection of information on mammography, which consists of six breast imaging registries across the country. The American Cancer Society, which just published its new breast screening guidelines, used the consortium findings, as well as a review of existing evidence on screening mammography outcomes, to develop its new recommendations.