Medications Pregnant Women Should Take, Avoid, And Think About

Treasure McGuire, The University of Queensland 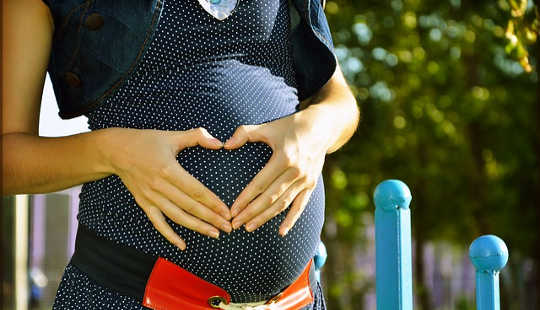 In a recent survey, one-third of Australian women who were pregnant or had a child 11 years or younger said they had taken either a prescription or over-the-counter medicine during pregnancy.

Women take prescribed, over-the-counter, complementary and lifestyle medications for various reasons when planning or during their pregnancy.

Many women take micronutrient supplements before, during and after pregnancy to ensure they and their baby are receiving adequate vitamins and minerals. A common one is folic acid, which helps prevent birth defects in the baby’s brain and spinal cord.

Many women also take medications for pregnancy-related conditions such as morning sickness.

Medication during pregnancy may also be necessary due to incidental illnesses such as coughs and colds, or to manage a pre-existing condition.

For women to be able to assess the risks and benefits of a medicine in pregnancy, they need to understand three key concepts.

First, all couples have a 3-5% risk of having a baby with a major birth defect. This is known as a “background risk” because it exists for everyone. Untreated maternal disease, such as epilepsy or depression, can increase this background risk.

If a medicine is potentially implicated as contributing to an adverse event, the risk from the medicine needs to be increased above the background risk. Unlike our grandmothers, women today expect a happy and healthy pregnancy outcome. This can lead to couples looking for something else to blame, including medication, when things go wrong.

Second, there are critical time points during a pregnancy when medicines are likely or unlikely to impact on pregnancy outcome.

A common time to seek help is when medication exposure occurs prior to the woman realising she is pregnant. The following table highlights that in the first four weeks from the last menstrual period, medication does not change the woman’s baseline pregnancy risk of a birth defect. This reassurance can reduce unnecessary anxiety for the rest of the pregnancy. 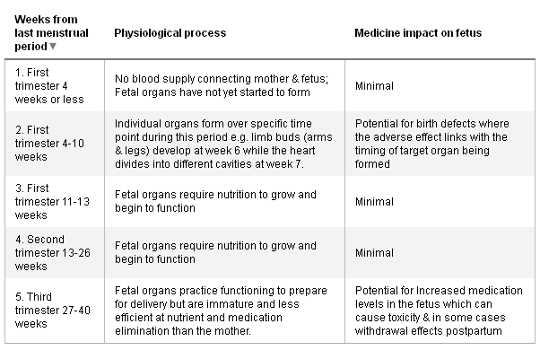 Finally, for a medication to be proven to cause birth defects, it must meet certain “rules”. It must:

• produce deformities in more than 3-5% of mothers exposed

• produce a consistent pattern of deformities

• be given in sufficient dosage

• be given at the precise moment the vulnerable fetal body organ is forming. Once the organ has formed, the fetus is at no greater risk from the drug than a child or an adult.

What this means for pregnant couples

While it is common sense to minimise unnecessary exposure to medication, the risk of adverse effects on unborn babies is likely to be higher from an untreated maternal disease than from the medication used to treat the condition.

Medication-induced birth defects tend to be overestimated by the public. There are very few medications that must be absolutely avoided during pregnancy.

The Australian Categorisation System for Prescribing Medicines in Pregnancy gives some initial guidance on things that should be avoided or drugs for which medical advice should be sought before being used in pregnancy.

The following medicines should be avoided, particularly during the first trimester:

Medications That Are Safer To Take Than Not

Untreated maternal disease, such as epilepsy or depression, can increase the likelihood of a child being born with defects.

It may be more harmful for the fetus if the mother stops medication prescribed for her chronic condition during the pregnancy. This could include antidepressants, asthma inhalers or anti-convulsants.

Most medicines fall into this category, so the first step is to decide if the medicine is needed or not. The need to manage symptoms such as headache, cough or cold during the pregnancy is subjective, but non-drug options such as rest, sleep or steam should not be forgotten.

If the woman decides to use a medication, then she should look for a Category A medicine as her preferred option on the Australian Categorisation System for Prescribing Medicines in Pregnancy. Category A means large numbers of women have taken the drug without adverse affects to her or the unborn baby.

By reading the packaging, labels and information that come with a medicine and asking questions of their primary health carers (doctor and pharmacist), women can get the right advice to use medication safely in pregnancy.

Treasure McGuire, Senior Lecturer in Pharmacy, The University of Queensland. Her research focuses on patient centred-care and quality use of medicines in the areas of reproductive health, medicines information, evidence-based practice, medication safety, complementary medicines and interprofessional education..