The Triumvirate of Money, Spirituality, and Service 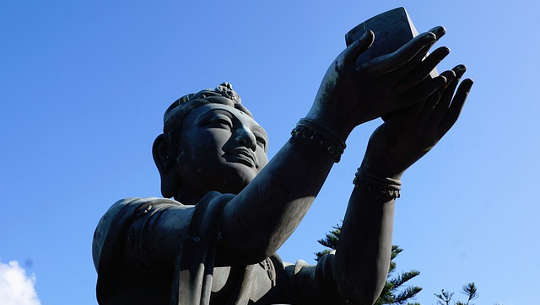 Once you learn to use money rightly, you will find gains on many levels. Your abundance, energy, joy — all will expand. I had an interesting experience, many years ago. I undertook what was, for me, an important project. I was doing it for others. As things turned out, it proved far more expensive than I first anticipated.

At first, I had to earn almost all the money for this project on my own. This meant going out and giving classes in many cities, and working harder than I'd ever worked before. It meant money worries I'd never had before. Also it meant worrying about getting enmeshed in materialism — a serious concern for me, as I've always tried to live my life by higher, spiritual values.

It was only at the end of this long struggle that I discovered what my real gain had been. It was far more spiritual than material. True, I had earned lots of money and had paid off the debts incurred to finish the project.

Beyond that, however — and inestimably more important to me personally — by doing what I had to do and not shirking the challenge, and by doing it for others, not for myself, I found myself inwardly much stronger, more energetic, more confident of my ability to handle whatever challenge life chose to give me next. Above all, I felt closer to God.

Money: It's All Energy

During the process of earning the money to pay for that undertaking, I came upon two statements by Paramhansa Yogananda regarding the spiritual aspects of moneymaking. The first of these was a promise he'd made to a student of his to the effect that, by helping his mission monetarily, the student would make more rapid spiritual advancement. The second statement was more general: "Making money honestly and industriously to serve God's work is the next greatest art after the art of realizing God." Whereas I used to look upon money-making as a rather sordid necessity of life, I've come to see the need for it as a great spiritual opportunity.

It is an interesting fact that many businessmen, once they decide to devote their lives and service to God, make rapid spiritual advancement. Formerly, even if they used their energy selfishly, at least they used it! In the process, they learned to focus powers which they could now apply toward meditation and higher development. Such people come out far ahead of many who feel that they are more spiritual simply because they scorn involvement in earning money.

Spirituality: It's All Energy

You see, it also takes energy to develop spiritually. Spiritual practices, such as meditation, are not passive practices. If one meditates properly, his efforts are dynamic. If you meditate with full awareness — not restlessly, but alertly, putting all your concentration on what you're doing — you will advance far more quickly than if you sit absent-mindedly, trying to think good thoughts.

Whatever you do, therefore, put your full energy into it. If you have to earn money, don't work at it with half your mind, while, with the other half, regretting what you are doing. If you are in a position where you don't have to think about earning money — fine; you can direct your energy toward other things. But this is not necessarily better than for a person to be in a position where he has to think about earning money.

Everything is an Opportunity for Service

You see, it isn't really important what we do, so long as we see everything we do as an opportunity for service, for applying energy creatively, for working for the welfare of all, for expanding our sympathies and awareness, for attuning our consciousness to the Infinite Intelligence.

Remember, God is in money, too. God is in business. God is in the banks just as much as He is in the mountains and the clouds, and in temples and churches. And though it is more difficult, I grant you, to see God in the marketplace, nonetheless, God is there. If you look deeply enough, you'll find God wherever you are.

Money Magnetism: How To Attract What You Need When You Need It
by Donald Walters.

Offering simple but powerful techniques for attracting material and spiritual success, Money Magnetism is a practical, easy-to-understand guide, sure to produce results. Filled with fresh, new insights about how to attract true wealth, this book goes far beyond the scope of other books. Each of the principles discussed can not only be used for wealth building, but also helps readers attract whatever they need in life, when they need it.

Swami Kriyananda is the founder of Ananda. In 1948, at the age of 22, he became a disciple of Paramhansa Yogananda. He bought property in Northern California in the late 1960’s and started Ananda Village. Now there are several more communities, including one in India and one in Italy, and many more centers and meditation groups. To visit the website of Ananda, visit www.ananda.org. Attaining The Hidden Treasure of Infinite Joy and Happiness

by J. Donald Walters
We all seek permanent happiness. No one has, as his long-term goal, a happiness that is evanescent.… The First Rule for Meditation Success: Don't Be Ruled by What Others Do

by J. Donald Walters
How long should you meditate? The first rule is, Don't be ruled by what others do. What works well… What Is Wealth? Is It Something We Create?

by J. Donald Walters
Wealth is something we create. It is not merely there, waiting for us to find it and lay claim to… What is the Key to Happiness?

by J. Donald Walters
An unfeeling heart has even been admired by many, as evidence of a "scientific outlook". The truth… by Corin Grillo, LMFT
How do you feel about money? And I mean, really feel about it? Do you resent money? Do you secretly…