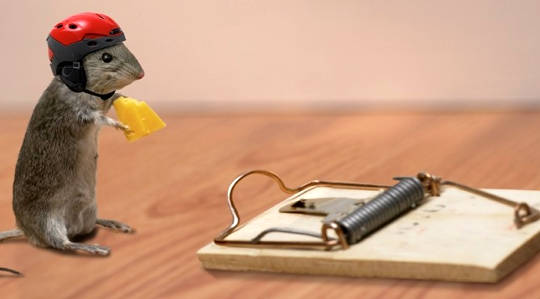 What separates people who ultimately succeed from those who fail, according to psychologist Dean Simonton, is simply a larger number of tries and a willingness to keep failing. People who succeed, in other words, don't succeed because they're necessarily smarter or more creative than people who don't (that is, their ratio of successes to failures isn't better than everyone else's). They succeed because they have an increased tolerance for failure, paradoxically suffering even more failures than people who don't succeed.

Not that persistence is necessarily more important than talent, I told Tanya. Likely no amount of persistence in the absence of talent will lead to brilliance. But brilliant or not, success typically comes only to those who persist.

"That's exactly why I keep failing," Tanya said in a self-deprecating tone. "I keep giving up." She shook her head in self-disgust.

"But then you try again," I pointed out. "Like you are now."

I nodded my acquiescence. This was an argument I couldn't win — nor that I even wanted to win. She needed her spirits buoyed, not her thinking criticized. "I'm sorry you're feeling so demoralized," I said. "I thought telling you about the National Weight Control Registry would encourage you."

"Why?" she said derisively. "Because they've all been able to do what I can't?"

Despite abundant warnings that we shouldn't measure ourselves against others, most of us still do. We're not only meaning-seeking creatures but social ones as well, constantly making interpersonal comparisons to evaluate ourselves, improve our standing, and enhance our self-esteem. But the problem with social comparison is that it often backfires. When comparing ourselves to someone who's doing better than we are, we often feel inadequate for not doing as well.

What causes social comparison not to divide us but to drive us? According to recent research, the trick may lie in comparing ourselves to people with whom we personally identify and who followed a path to success we believe we can follow ourselves. Also important is our conviction that the people with whom we compare ourselves succeeded not because of some special ability, position, or luck but because of their own efforts.

In fact, effort is such an important issue that even negative role models can inspire and motivate us if we believe they failed because they didn't work hard enough. So not only can the strict dieter who exercised three times a week and lost a hundred pounds bolster our motivation and enthusiasm, so can the couch potato who's remained stuck, due to a lack of effort, at the same weight for years.

On the other hand, if we pick a positive role model who took a path to success we don't think we can follow, or if the people with whom we compare ourselves seem endowed with special abilities we think we're missing, not only won't social comparison work, it may leave us feeling more discouraged than before.

So whenever we become discouraged, I told Tanya, we can encourage ourselves by looking for examples of successful work we consider inferior to ours (however mercenary such a strategy might seem), or by finding a role model who found a path to success we think we can follow ourselves. "Which is why I brought up the registry," I concluded. "Because it isn't filled with triathletes and tennis pros. It's filled with housewives and teachers. And women from Indiana."

Believing in Our Ability

Tanya stared at me for a few moments in silence. "But what if I really can't do it?" she said finally. "Sometimes ability, position, and luck do play a role in success."

"Maybe you can't lose as much as someone else," I said. "But lose weight at all? Of course you can. You just need to believe it's possible."

She exhaled a long breath. "You have a pill for that ?"

Research suggests that the greater our belief that we can do something, the greater the likelihood we can actually do it. In one study of smokers, for example, subjects who rated themselves even moderately confident that they could quit were ten times more likely to succeed than subjects who didn't.

The reason optimism yields results isn't that we necessarily tend to try harder when we think a goal is achievable; rather, we tend to try more often. Optimism, in other words, yields persistence, for nothing seems to keep us going like believing success is possible. And nothing keeps us believing success is possible, even in the face of failure, like overestimating our abilities.

Importantly, though, studies also show that when high expectations for success are warranted — that is, when they're based on accurate appraisals of both our abilities and the circumstances we face — such optimism does in fact become a self-fulfilling prophecy, increasing the actual likelihood of success." In other words, optimism does help us to succeed, but only when it's been earned.

The Undefeated Mind: On the Science of Constructing an Indestructible Self
by Alex Lickerman MD.

Alex Lickerman, MD, is a physician and former director of primary care at the University of Chicago. He is also a practicing Nichiren Buddhist and leader in the Nichiren Buddhist lay organization, the Soka Gakkai International, USA (SGI-USA). Dr. Lickerman is a prolific writer, having written for medical textbooks, national trade publications, and even for Hollywood with an adaptation of Milton's Paradise Lost. Dr. Lickerman's blog "Happiness in this World" is syndicated on the website of Psychology Today, and receives over one hundred thousand unique visitors per month. Please visit his website at www.alexlickerman.com. During Panic Attacks, Can Our Minds Be Trusted? Building Strength and Success from Adversity