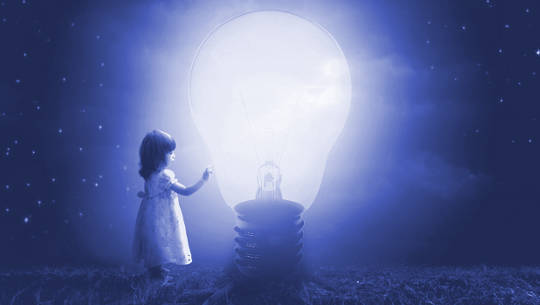 While meandering through a bookstore, I discovered a wealth of books for dummies and idiots. You have probably seen the many volumes directed at stupid people, such as Computers for Dummies and Complete Idiot's Guide to Dating. I even saw Complete Idiot's Guide to Near-Death Experiences! There are hundreds of titles in each of these very popular series, and the number is growing rapidly.

I was struck by how readily we identify ourselves as dummies and idiots. Obviously we think we are stupid, and these books will help. I wonder what would happen if I published a similar series for geniuses, such as Golf for Sages or The Complete Genius’s Guide to Home Repair. I have a hunch they wouldn’t sell very well at all. Not because we are not geniuses. Because we have been trained to regard ourselves as stupid.

Believing What You Were Told?

When I was little, I sat on my front porch one morning and sang several rousing verses of "Take Me Out to the Ballgame." A few days later I overheard my mother casually tell someone, "Alan has a foghorn voice." That idea made an impression on me, and I did not sing for many years. After all (at that age), your mother knows everything, and if she said I couldn’t sing, I couldn’t sing.

Perhaps you had a similar experience. Perhaps early in life you adopted a thought about yourself that defined you as small, ugly, incapable, or unlovable. Most of us did. And perhaps you went on to live as if that identity was true. And perhaps, like many, you collected a pool of tears in your heart and went through life hurting because you wished you could be more.

You are more. The genius you were born as, still lives, and can be reactivated at any moment. Genius is your reality and the dark programming is your adopted personality. When Abraham (through Esther Hicks) was challenged, "You can’t teach an old dog new tricks," Abraham answered, "You have no idea what an old dog you are!" Who you were before you learned self-defeating tricks, is still very much available and eager to come forth and shine.

I Believe In Your Genius!

There is a story in the annals of education about an elementary school teacher who arrived on the first day of school and perused her class roster. Next to each child’s name was the number of a very high I.Q. "126, 135, 140," Miss Everett read aloud, eyebrows raised. "Thank goodness I finally got a bright class!"

Miss Everett went on to stimulate the loftiest abilities in her wiz-kids. She gave them challenging projects, took them on field trips, and offered them leeway to explore their work in creative ways. At the end of the semester all the students earned A’s and B’s. The day after report cards came out, the principal called her into his office and asked,

"Miss Everett, what did you do with these kids?"

"What do you mean?" she asked innocently.

"You took some of the lowest-functioning students in the school and turned them into geniuses!"

"I don’t understand what you’re talking about," the teacher replied. "These kids were bright when I got them. Here, just look at their I.Q.’s in my roll book."

Sowing and Reaping: If You're Sowing Weeds, Don't Expect Wheat

The principal scanned her roster and replied, astonished, "Miss Everett, these are their locker numbers!"

The people around us tend to become who we think they are, so let us focus on the highest in everyone we meet.

Give Yourself a Reputation to Live Up To!

Renowned success teacher Dale Carnegie, author of the most popular self-help book of all time, How to Win Friends & Influence People, began his career in an unexpected way. One night while teaching an adult school English course, he ran out of lecture material before the class time was up. So he invited several students to each stand before the class and talk about him -- or herself -- an exercise utterly unheard of at that time.

The results were extraordinary! The speakers came to life in a way he had not seen when they were studying English, and the class responded energetically. Mr. Carnegie had happened upon the transformational power of authentic self-expression, which ultimately revolutionized (perhaps even created) the genre of personal development. Later he wrote, "Give them a reputation to live up to!"

The words "genius" and "genuine" are almost identical, and they proceed from the same Latin root word. The key to genius is genuineness. The more you are who you are, the more your genius comes forth. On the other hand, the more you sell out and try to be what you think you should be or live up to others’ expectations, the more you stifle your brilliance.

Most great scientists, inventors, musicians, and artists, are somewhat eccentric. They have the guts to be all of what they are, even if the package doesn’t fit the social mold. They just let all of their talents rip, and in so doing they change the world for the better.

Here’s to your genuine genius. I’ll look for your book in the store. Keeping Your Yin Alive in a Yang Society

The Un-united States Of America Part 3: The Day Of Reckoning Is Now

by Jude Bijou, M.A., M.F.T.
We've become so focused on how we'll maneuver to fit it all in that we no longer stop to smell the…