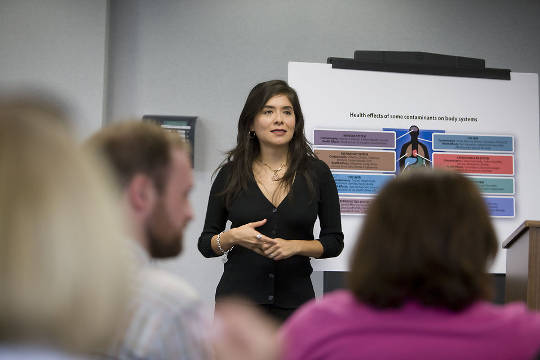 This includes maintaining social media personas that display modesty, sociality, and “an aura of decorum”—the same restrictions that often apply to women in off-line business settings.

“While it’s inspiring that we are seeing a rise in female entrepreneurship in the digital age, these business categories tend to be highly feminized. This means that gender hierarchies and inequalities in the world of work endure,” Duffy says.

They interviewed 22 self-employed women professionals who work in digital media, including blogging, writing, entertainment, and marketing. The researchers asked the women how they used social media to run their businesses and how they understood entrepreneurship and their relationship to it. All the women were active on social media platforms including Facebook, Instagram, Twitter, and Pinterest.

Often, female entrepreneurs were caught in what the researchers call a “digital double-bind.” On one hand, they participated in the traditionally masculine-coded category of entrepreneurship, where figures like Facebook co-founder Mark Zuckerberg and Amazon.com founder Jeff Bezos are often upheld as paragons of success; on the other, they were constrained by feminine stereotypes. That resulted in taking on more work and risk than men to ensure the success of their online ventures.

The entrepreneurs felt obligated to use social media to build their brands in an understated way; cultivate intimate relationships with audiences, clients, and peer networks; and share their personal lives in a professional context. These strategies adhere to gender roles that cast women as social and emotionally expressive, Duffy says. And they emphasize the social prescription that women should be modest about their achievements, she adds.

For example, the entrepreneurs promoted their businesses with a soft sell, rather than an aggressive approach. Many attributed their successes to their ability to “build relationships” and grow their businesses “organically.”

“By framing these successes as ‘organic’ rather than calculated or hard-won, interviewees effectively conceal the time and energy required to participate in networking and marketing activities, rhetorically distancing themselves from overt self-promotion,” the study’s authors write.

“…visibility can be a very dangerous thing for a woman.”

The business owners also felt compelled to constantly interact and maintain social ties with clients and social media followers. Many viewed these social interactions as a prerequisite for success.

But they also highlighted the stress brought on by the urgency of building relationships with their client base on social media—and the difficulty of not going over the top with their interactive intimacy to the point where it would damage their business credibility.

In addition, the entrepreneurs felt obligated to put their private lives on public display to cultivate relationships with clients. As a professional decision, they had to consider whether to post photos and information about their families on their social media accounts, for example. “One interviewee recounted how her website was hacked repeatedly and she began to worry that her personal information could threaten the safety of her family. She explained how ‘visibility can be a very dangerous thing for a woman,'” Duffy says.

The authors linked this obligation to act “feminine” on social media to a long history of women’s devalued, unpaid labor, from child care and domestic work to the “emotional labor” implicit in the service industries.

“Though our culture valorizes self-enterprise and prods young people that ‘We’re all entrepreneurs now,’ it’s important to keep in mind the many ways in which digital media amplifies—rather than challenges—traditional norms and social hierarchies,” Duffy says. by Susan Kelley, Cornell University
Older adults who have fallen for scams by friends, relatives, or strangers behave just as their… by Susan Kelley, Cornell University
"Instead of relying blindly on advice from self-help authors about how to be happy, get to know… by Susan Kelley, Cornell University
"It's very surprising and disappointing to find such low rates of people helping each other and… by Jason Eckert, University of Dayton
When recent or soon-to-be college graduates begin to seek employment, many inevitably turn to… by David Peetz
The flexibility is really in employers’ ability to hire and fire, thereby increasing their power.… by Kathleen Hawkins
At the office, we can demonstrate our personal relationship with, to quote Ernest Holmes, the… Putting Our Values to the Test in the Workplace --- If Not Now, When?

by Lenedra J. Carroll
An understanding of values is essential in business operation: not as a semantic discussion about…