Does Makeup Make Other Women Jealous? 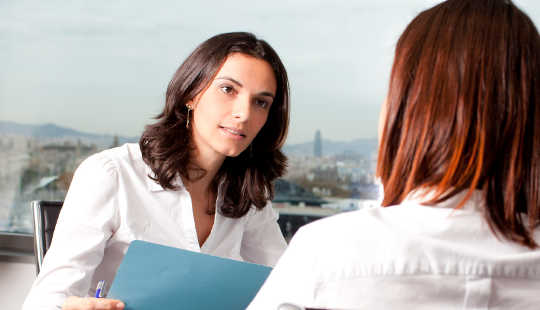 Imagine you’re sitting at an important job interview. You’re suitably dressed and have taken the time to do your hair and apply some makeup. You’re smiling, answering questions, and attempting to appear competent, and, obviously, hireable.

The panel, made up of men and women, aren’t giving anything away. What do you think might be influencing their perceptions of you? Though there is the old adage that one shouldn’t judge a book by its cover, makeup is one way in which they may be judging you. It’s not just about whether someone simply likes or dislikes your makeup – it can be change the perceptions that men and women have of you in different ways. In our latest study, we found that women who wear makeup appear more dominant when they are judged by other women, but appear to be more prestigious when judged by men.

Both dominance and prestige are ways in which a person can reach higher status in society, but these routes to status could not be more distinct. People pursuing the dominant strategy are not afraid to use force and intimidation to get their way and reach the top. Prestigious people, on the other hand, possess merits and skills that make others freely want to follow their lead.

Take, for example, UFC champion Ronda Rousey and her pre-fight smack talk. Like many professional fighters, Rousey uses these talks to intimidate her opponents and, in some cases, other celebrities – a sure-fire dominant strategy.

On the other hand, Democratic Party presidential nominee Hillary Clinton takes a much calmer and knowledgable approach to achieve her goals – in contrast to the force and intimidation of opponent Donald Trump – and is looked up to by many who follow her lead. This is a classic example of a prestigious strategy. Both of these women are highly influential, but there is clearly a difference in the ways in which they achieve their status.

Both sexes can achieve higher status through these prestigious and/or dominant routes. But for many ordinary women, a route to status is the use of makeup. Women wearing cosmetics are routinely perceived as having a higher status professionally. So in our study, we wanted to find out which “route”, dominance or prestige, women wearing makeup were perceived to be using to reach this higher status.

The application of makeup varies dramatically from person to person, and different amounts affect perceptions differently. To get around this, we digitally applied the same amount of subtle makeup to real images of women’s faces, based on the average amount of cosmetics worn by a sample of women. Then, we asked men and women to rate these faces, both with and without their new makeup, for attractiveness, dominance, and prestige. The results were quite unexpected. 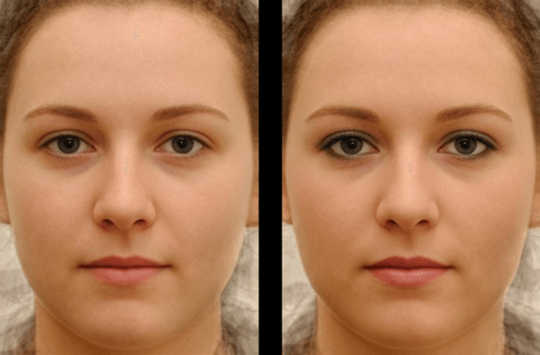 A change of perception in one simple step. Author providedIt turns out that a small amount of makeup applied to faces makes women appear more attractive to both men and women. But that’s not the unexpected part: what surprised us was that, when it came to perceptions of social status, men think women with makeup look prestigious, while women think women with makeup look dominant. Makeup seems to signal two different “status” markers to either sex.

We initially thought that, for men, this could be explained by their not necessarily needing to directly compete with women physically, as men are on average physically stronger; as well as the fact that prestige can be considered a positive trait, and attractiveness goes hand-in-hand with other positive traits –- you’ve probably heard of this “halo effect”.

Why women with makeup looked more dominant was something we wanted to test further. Perhaps they are more threatening to others of the same sex, because they might attract another’s partner, or make other women feel less attractive? Indeed, research has shown that women tend to be more jealous of physically attractive women, while men tend to value attractiveness in potential mates more than women do.

We looked at this in some more detail. A new set of female participants rated women’s faces with and without makeup, to answer the question: “How jealous would you feel if this woman were to interact with your partner?”. We also showed pictures of a woman’s face with and without makeup side-by-side and asked “which do you think men would find more attractive?” and “which do you think would be more promiscuous?”.

As might be predicted by our threat hypothesis, women with makeup were viewed as more promiscuous, and more attractive to men, and were also more likely to make women jealous. So makeup seems to be capable of making other women jealous, and that could be why women view made-up faces as more dominant. And it seems women can spot how makeup works on men’s perceptions, correctly spotting that faces with makeup are more attractive, and possibly prestigious, to men.

The implications of this type of thinking could be important. For example, studies suggest that faces judged to be higher in competence are also more likely to be “elected” into high ranking positions. Makeup, in very real terms, can facilitate or hinder a variety of social interactions, depending on the person who is being interacted with. So the next time you have a job interview, it might be worthwhile considering the number of men and women on the panel beforehand. Men may think you’re prestigious and view you in a positive light, but you might find some women may be feeling negative vibes – all because of the way you apply your beauty products.

Viktoria Mileva, Postdoctoral fellow, University of Stirling. Her interests lie in uncovering how we become familiar with stranger's faces and what the limits of our recognition abilities are.

Alex Jones, Lecturer, University of Swansea. He is interested in social and evolutionary perspectives of psychology, and have used these approaches to study topics related to face perception.

Letting Your Emotions Help You Create the Results You Desire

by Sandy C. Newbigging
Befriending your feelings can help you to enjoy greater physical health and life success. Emotions…